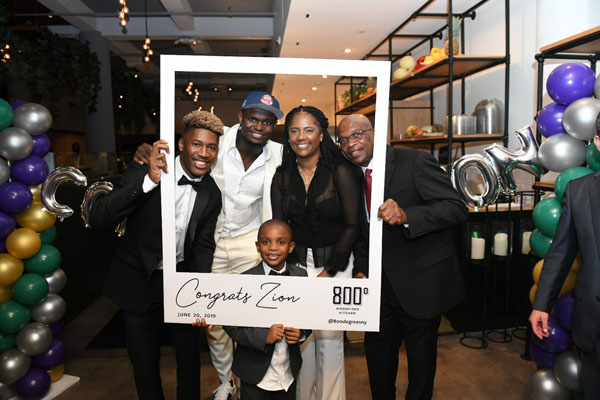 Considered NBA’s best prospect since LeBron James and tonight’s No. 1 draft pick, Zion Williamson was seen celebrating last night at 800 Degrees Woodfired Kitchen’s Midtown location in NYC.  The 6-foot-7-inch small forward/power forward and the newest team member of the New Orleans Pelicans hosted an intimate Mardi Gras-themed evening with friends and family.  The restaurant — which is open nightly for dinner, but closed for the private function — served up their eponymous woodfired and rotisserie offerings.

In addition to pizzas, salads and salmon, specially prepared menu grabs from the evening were DWade’s Woodfired Burger and UD’s Woodfired Chicken Wings.  Dwyane Wade and Udonis Haslem, both three-time NBA champions, are owners of the 800 Degrees Woodfired Kitchen franchise in Miami. Wade also serves as the Global Partner for the restaurant brand, which has 15 locations, spanning domestically and internationally from the West Coast to Japan.

He and his family closed out the evening leaving 800 Degrees around 1 a.m..