When life gives Don Lemon lemons, he makes lemonade – at least out of his highly rated show on CNN! This award-winning anchor, who hosts CNN Tonight with Don Lemon and is a correspondent across the network, has taken over primetime in the prime of his life.

Lemon joined the CNN family in 2006, and he has continued to bring “real news” to the nation ever since! From reporting on-the-scene stories to interviewing politicians from both sides, as well as those with humorous, heartwarming and heavy stories to tell, Lemon has won a place in the people’s hearts for his honest reporting, which according to Don, is the most rewarding part of his role as a reporter.

Lemon, one of the most lovable news anchors on the air, has indeed reached a broad audience over the years, and he’s broken down many barriers. “I saw this woman on television who looked like my family, and growing up, there weren’t many role models on television who represented people like me,” said Lemon. “She was a local news anchor and I said, that’s what I want be, and the rest is history.” Don is making history himself now while informing the public of the most pertinent stories of the day, with his perfectly dimpled smile, of course.

Don has always been driven and dedicated, which is why he remained determined to succeed, even after his journalism teacher at Louisiana State University told him he wouldn’t make it, prompting him to move to New York. This ambitious anchor soon became a self-proclaimed “news gypsy,” working around the country. After starting out in New York City as a trainee in the newsroom and building his resume tape, Don bounced around from Birmingham, to St. Louis, Philadelphia, Chicago and Atlanta, with a few stops in New York in between, before finally settling in the Big Apple for good. He eventually enrolled in Brooklyn College, which he said “taught me a lot about diversity.”

After appearing on-air in the afternoons, this number one newsman became the primetime anchor on the weekends before filling in for Erin Burnett, who was on maternity leave at the time. From there, he anchored in primetime, and now cable wouldn’t be the same without his candor and calm demeanor.

“I’ve always wanted to know what’s behind things, and what the truth is or was, and that’s what motivates me to do my job. I want to be able to inform the American public everyday and to give them the truth and that’s never been more important that it is in this moment, so that’s my motivation every day, and I won’t stop. People around the world watch, and they know what the reality really is, and the truth is my motivator—truth and facts.”

He might be from Louisiana, but this Southern boy, who has made Harlem his home, is really a city kid at heart. “I love New York City. It’s tough, but there are very few places I think I would live and none I would rather live in as much as New York City. I love living here. I live uptown in Harlem. I moved to Harlem even before CNN moved me back to New York. I bought a place here because I thought it was beautiful. It was in the middle of a renaissance; there’s so much history here.  You can see the sky, the avenues are bigger, the streets are bigger. There are restaurants, clubs and new businesses and coffee shops opening, so I love it up here. It’s quiet, and I feel like I’m not right in the middle of the chaos of midtown or downtown, so I moved here for that, especially for the history and what it means for African Americans. I’m in Central Harlem, and it’s really amazing. If you look at what Columbia is doing here as well, they’ve invested a lot in Harlem, and it’s really beautiful here.”

These might be challenging times, but Lemon always takes the lead when it comes to dispensing the most crucial and candid headlines.  “My job hasn’t changed that much, but I do have an even stronger commitment to the business, and it’s important that I get the stories right and that I inform the public. I have to do a lot of fact-checking in real time, and I have to make sure people know we have a shared sense of reality, so I have a bigger commitment to it. The truth does matter and facts do matter, even when people would like you to believe otherwise. My work schedule is a lot more intense. I do two hours now. Most people do an hour in primetime. It’s tough, but I’m a soldier!” 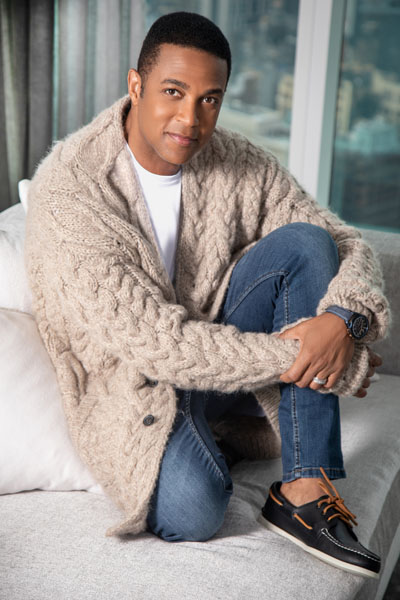 Don, who takes his fact-checking duties seriously, loves to hear from his diehard fans, and he is always ready to take on the truth! “It is rewarding because I know people do believe in journalists and they do trust us, no matter how much negativity or criticism we get. More people come up to me on the street and say, ‘Thank you for looking out for us and for keeping us informed,’ and they get what’s happening. They get that journalism is under attack and they support it, and I really appreciate that.”

This night owl, who gets up around 10 or 11 in the morning, loves to take a nap in order to stay on top at the network, and he has had many memorable and meaningful moments on the air. “One of my favorite stories I did was about a guy who calls himself a country boy, but says not all country boys are homophobes, and he put a giant rainbow flag on the back of a tailgate truck in Oklahoma, which I thought was cool. We also have this series called Champions for Change, and we talk about people’s stories that we’ve featured, and mine was a program called Oliver Scholars, which helps black and Latino kids with getting into primary or secondary schools and then into Ivy League colleges. Any time I can do a story like that is great, especially in the environment we’re in now with all the negativity and division. I also got to shoot a couple promos for an original series where I got to pretend I was John Travolta from Saturday Night Fever walking down the street with my black pants and my chest out, so that was pretty cool.” 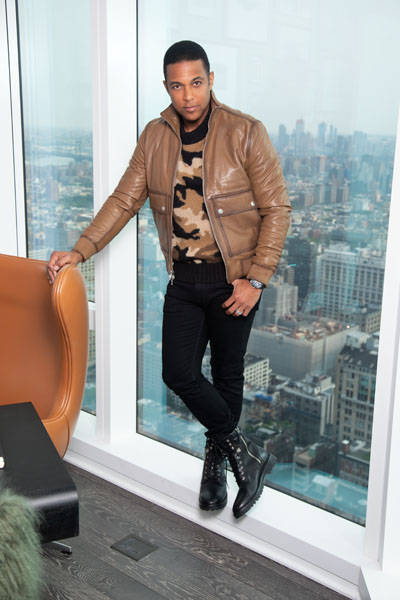 He might be busy trying to save the world from un-factual facts, but Lemon always finds time to give back when he can. After all, he’s all about standing up and speaking out for what – and whom – he believes in. Aside from doing a story on Oliver Scholars on CNN, Don became involved with the organization himself after being honored by them at their dinner gala. He eventually joined their board and now volunteers at their center and speaks to kids at school whenever possible. He also served as the emcee for the Samuel Waxman Cancer Research Foundation’s “Ladies Who Lunch for a Cure,” which was hosted at a private Upper East Side residence, and he tries to help out with the causes he believes in, despite his busy, non-stop schedule.

While he loves his primetime spot, Don enjoys breaking away from the breaking news cycle in the summer and retreating to his home in Sag Harbor with his fiancé, Tim Malone, a broker at Corcoran whom he got engaged to in April. “I love spending time with my fiancée and my two dogs. We try to get away to Long Island as much as possible. I love spending time with friends at the beach and just having a normal, everyday life rather than being inundated with the news cycle. I don’t really have any summer plans except I want my family to come up and spend time with me. Long Island has some of the most beautiful water and sites, and in the summer, it’s really spectacular. I love hosting them; it’s a place we can all be together and don’t have to worry about traveling, and it’s something I feel fortunate to have.”

While they are still figuring out where and when they are going to tie the knot, Lemon and the love of his life are most likely going to make things official in the spring or summer of next year in either New York, New Orleans or on Long island – or they might just go to City Hall. No matter where they wind up, they are ready to wind up together forever!

Where do you go after primetime? Well, the way things are looking for Lemon, he is going to remain on primetime and in his own prime for a long time!