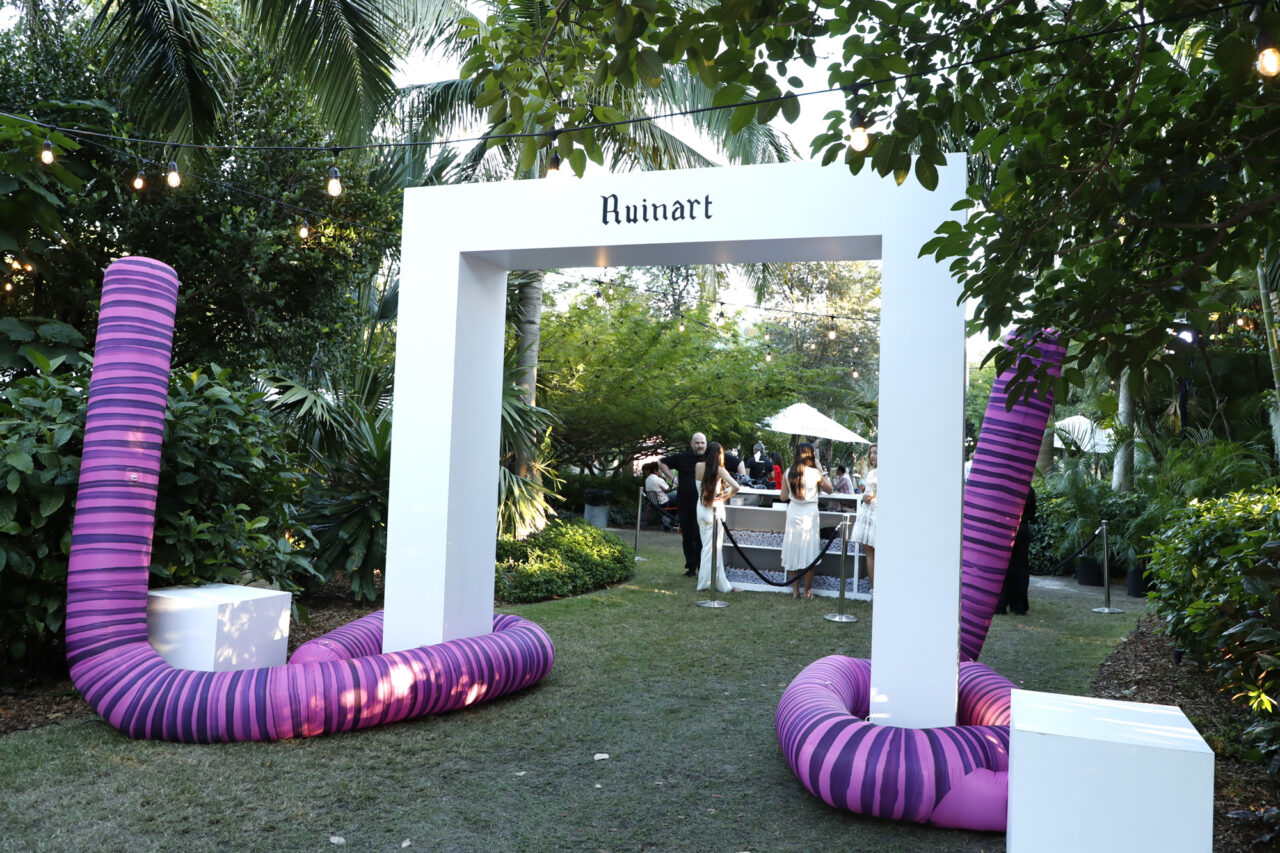 After a year long hiatus of Art Basel Miami, this year the fair returned in full regalia.  The House of Ruinart kicked off Art Basel Miami Beach with a star-studded champagne fete celebrating artist David Shrigley who had been involved with this project for nearly 3 years. Shrigley’s artwork series, Unconventional Bubbles, was the inspiration behind the evening, featuring life-size interpretations of the artist’s witty designs and a special artistic and culinary celebration alongside rising Chef Flynn McGarry.

Each year, Maison Ruinart welcomes a contemporary international artist in Reims to share their vision of the famous, nearly 300-year-old champagne house. In the footsteps of Liu Bolin (2018) and Vik Muniz (2019), British artist David Shrigley looked at Ruinart through 36 drawings and gouache paintings, as well as 3 neon installations, 2 ceramic pieces and 1 door. This British icon with a somewhat leisurely character is an acerbic artist who views today’s world with unequalled irony.

Delivering a singular vision of a Maison that is just as singular, David Shrigley invites us to rediscover Ruinart with offbeat humour and no concessions. His art shines new light on the Maison’s vineyard, heritage, and savoir-faire. In the Champagne region, he scrutinized the vineyard, explored the wine cellars, and noted every expression and gesture he glimpsed. With curiosity, he studied the ways of the people working the vines, oenologists and other Ruinart collaborators. His sharp regard took in the closely guarded secrets of champagne making.

Through his drawings, neon installations and sculptures, David Shrigley offers us a benevolent yet unbeaten path, which generates surprising interactions between nature and the different steps in the wine-making process. He also makes us more aware of the environmental commitments Maison Ruinart upholds every day. Because humour is, without doubt, one of the best ways to raise awareness.

Here we caught up with David Shrigley about his upcoming projects post Art Basel and what his thoughts were on the fair and NFTs.

What are your next projects?

I have a new exhibition in London called Mayfair Tennis Ball Exchange, it’s quite an odd piece about interaction at the Stephen Friedman Gallery.  And then I have a solo retrospective in South Korea.  I don’t really like retrospectives I don’t want to look at the old work, and I always want to make new work.  I’ve also been renovating a new studio near where I live in Devon and I’m looking forward to that.

I’ve been processing the changes that were forced upon us and how they have changed the way we think about the world, what we want to do, where we want to live,  and what we don’t want to do.  This was my first trip abroad since the pandemic.

What do you think of the NFT craze that has been all the hype of the fair this year?

Time will tell and for me it is just another medium for art.  If they just invented oil paintings and you gave me oil paintings it doesn’t mean I’m going to make a good oil painting, same with NFTs. Just because it’s a really interesting with a bit of technology doesn’t mean that you’re make any good art out of it. The rules are still the same. You still have to deal with the context. You still have to deal with the nature of the technology. So I think it’s entirely possible to make a great work as an NFT, but it’s equally possible to make something that’s rubbish.  We’re used to it in the art world anyway, selling nothing and buying this conceptual art.