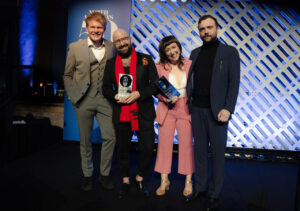 On June 7, 2022, the 50 Best Bars in North America were named at a live awards ceremony at Capitale in New York. This inaugural annual ranking features bars from across the North American continent, including the USA, Canada, Mexico and the Caribbean. New York’s Attaboy is crowned No.1 as The Best Bar in North America, with Mexico City’s Handshake Speakeasy at No.2 now boasting the title of The Best Bar in Mexico, followed by Licorería Limantour, also in the Mexican capital, close behind at No.3.

Toronto’s Civil Liberties, at No.10, wins the title of The Best Bar in Canada, while Puerto Rico’s La Factoría, at No.12, earns The Best Bar in the Caribbean accolade. Overall, the USA leads the list with 29 bars, with Mexico fielding 11, Canada boasting eight and the Caribbean celebrating two top bars.

Over the years, Attaboy has become an international cocktail beacon and haven of beloved modern classics, like Ross’ Penicillin and McIlroy’s Greenpoint. The bar, which Ross and McIlroy continue to own, along with a Nashville, Tenn. outpost, is currently led by star drink-slinger Haley Traub, the national winner of the 2018 Speed Rack bartending competition. Traub, who brings Midwestern charm and a vivacious personality, oversees day-to-day operations and energizes the highly hospitable bar team. Named on The World’s 50 Best Bars list every year since opening, Attaboy earned the Rémy Martin Legend of the List 2021, a status that winning North America’s Best Bar resolutely reaffirms.

Mark Sansom, Content Director for North America’s 50 Best Bars, says: “We tip our hats to Attaboy, the legendary bar by Sam Ross and Michael McIlroy now celebrating 10 illustrious years of making cocktail history. Today, it adds to this glorious mixological legacy as it earns the No.1 spot on North America’s 50 Best Bars list 2022. Despite its modest size, it has had an outsized influence on how we drink not only in New York and the USA, but globally as well. Under Haley Traub’s exuberant leadership and continuous innovation, we see this legacy shining brightly into the future. We commend all of the bars on the inaugural list of North America’s 50 Best Bars that are doing a stellar job invigorating the continent’s drinks scene as we emerge from what has been a very challenging time. Hospitality is an incredibly important engine of economic recovery and these bars’ creativity and determination demonstrate the best of our industry in North America.”

Elisa Gregori, Perrier International Business Unit Director, says: “On behalf of Perrier, the leading partner of The World’s 50 Best Bars since 2014, we’re extremely thrilled to see the additional regional North America’s 50 Best Bars list come to life in 2022. North America is home to a vibrant bar community, marked by a variety of cultural influences, always putting hospitality at the center and continuously pushing for further development in community wellbeing. Consequently, it’s our pleasure to support 50 Best in shining a dedicated spotlight on the best bars in the region. A big congratulations from everyone at Perrier to the team behind Attaboy for being awarded the No.1 bar in North America, as well as all the bars that made the inaugural North America’s 50 Best Bars list!”

USA: New York Leads, With Strong Contenders Coast to Coast and Beyond

One of the world’s hotbeds of mixology and a cornerstone of the cocktail renaissance, New York doubles down its preeminence, leading the list with 11 bars. These esteemed drinks destinations include Attaboy (No.1), Katana Kitten (No.4), Dante (No.8), Double Chicken Please (No.17), Amor y Amargo (No.23), Dear Irving (No.26) and Overstory (No.27), which wins the Michter’s Art of Hospitality Award. Employees Only (No.30), The Dead Rabbit (No.31), Mace (No.35), which earns Siete Misterios Best Cocktail Menu, and Clover Club (No.43) round out the list.

Chicago is notably represented by Kumiko securing No.5 and The Best Bar in the Midwest award, and Miami secures a trifecta with Café La Trova nabbing No.6, Sweet Liberty No.14 and Broken Shaker No.32. Other prominent cities include Los Angeles, with its spirited triumvirate of Thunderbolt (No.9), Death & Co (No.34) and Genever (No.50).

Other cities that field top bars include Washington, D.C. with Service Bar (No.18), San Diego with Raised by Wolves (No.19), New Orleans with Jewel of the South (No.24), Las Vegas with Herbs & Rye (No.28), Oakland with Friends and Family (No. 33), Denver with its own iteration of Death & Co (No.36), San Francisco with ABV (No.39), Phoenix with Bitter & Twisted (No.44), Houston with Julep (No.46) and Portland with Teardrop Lounge (No.48). Far from the mainland but close to the hearts of cocktail enthusiasts, Honolulu’s Bar Leather Apron comes in at No.42.

Mexico: Mexico City Dominates the Region, with 6 of the Country’s 11 Bars on the List

Mexico City contributes more than half of the region’s bars to the list. Handshake Speakeasy (No.2) is named The Best Bar in Mexico, and Licorería Limantour (No.3), catapulting the duo to the stratosphere of the list, with Baltra Bar at No.7, Kaito del Valle placing at No.13, Café de Nadie taking No.15 and Hanky Panky ensconced at No.16.

Playa del Carmen’s Zapote Bar ranks at No.11 and win the London Essence Best New Opening award. Cocktail excellence is also cemented in Oaxaca with two bars, Sabina Sabe (No.20) and Selva (No.22), with Guadalajara’s El Gallo Altanero claiming No.21 and Tulum’s Arca securing No.37.

Canada: The Great White North Celebrates 8 Bars on the List, with Toronto Home to Half

Toronto fields half of the list’s bars in Canada, including Civil Liberties at No.10, which earns The Best Bar in Canada. Mother claims No.38, Bar Raval takes No.41 and Bar Mordecai comes in at No.47. Montreal hits a double with El Pequeño Bar earning No.29 and Cloakroom Bar claiming No.45, while Vancouver, B.C.’s The Keefer Bar is ranked No.25, and Halifax’s Bar Kismet securing No.49, picking up the Ketel One Sustainable Bar Award in the process.

The Caribbean: Beckons with 2 Top Bars

Puerto Rico’s La Factoría (No.12) is crowned The Best Bar in the Caribbean, with Ernest Hemingway’s Havana haunt, El Floridita, nabbing No.40.

To kick off the ceremony, The Bamboo Room in Chicago was presented with the Campari One To Watch award, which is given to a bar outside the main list that the 50 Best team believes has the ability to break into the ranking in future editions.

Christina Veira of Toronto’s Bar Mordecai (No.47) is celebrated as the Roku Industry Icon. For this award, all 220 members of the voting Academy are asked to name the person who has done more for the progress of the bar industry than any other individual. In addition to being General Manager of this community-focused bar, Veira is Toronto Cocktail Week’s Director of Programming and has emerged as a powerful voice for social justice in the hospitality sector.

Playa del Carmen’s Zapote Bar in Mexico clinches the London Essence Best New Opening title at No.11, as the bar which enters the list in the highest position of any that have opened during the voting period. Created and operated by Rosewood Mayakoba, Zapote Bar is a love letter to the Yucatán, its products, culture and people.

Family-owned and operated Bar Kismet in Halifax secures the Ketel One Sustainable Bar Award, which is awarded to a bar that demonstrates the strongest commitment to sustainability. With a focus on sustainable seafood, Bar Kismet strives to find creative ways of using up ingredients in new ways to minimize waste from both the restaurant and the bar. The Ketel One Sustainable Bar Award is independently adjudicated by 50 Best’s audit partner, the Sustainable Restaurant Association.

Other special award winners announced in the run-up to the event on June 7 included Overstory, New York, which was honored with the Michter’s Art of Hospitality Award and Masahiro Urushido of NYC’s Katana Kitten, who earned the coveted title of Altos Bartenders’ Bartender.