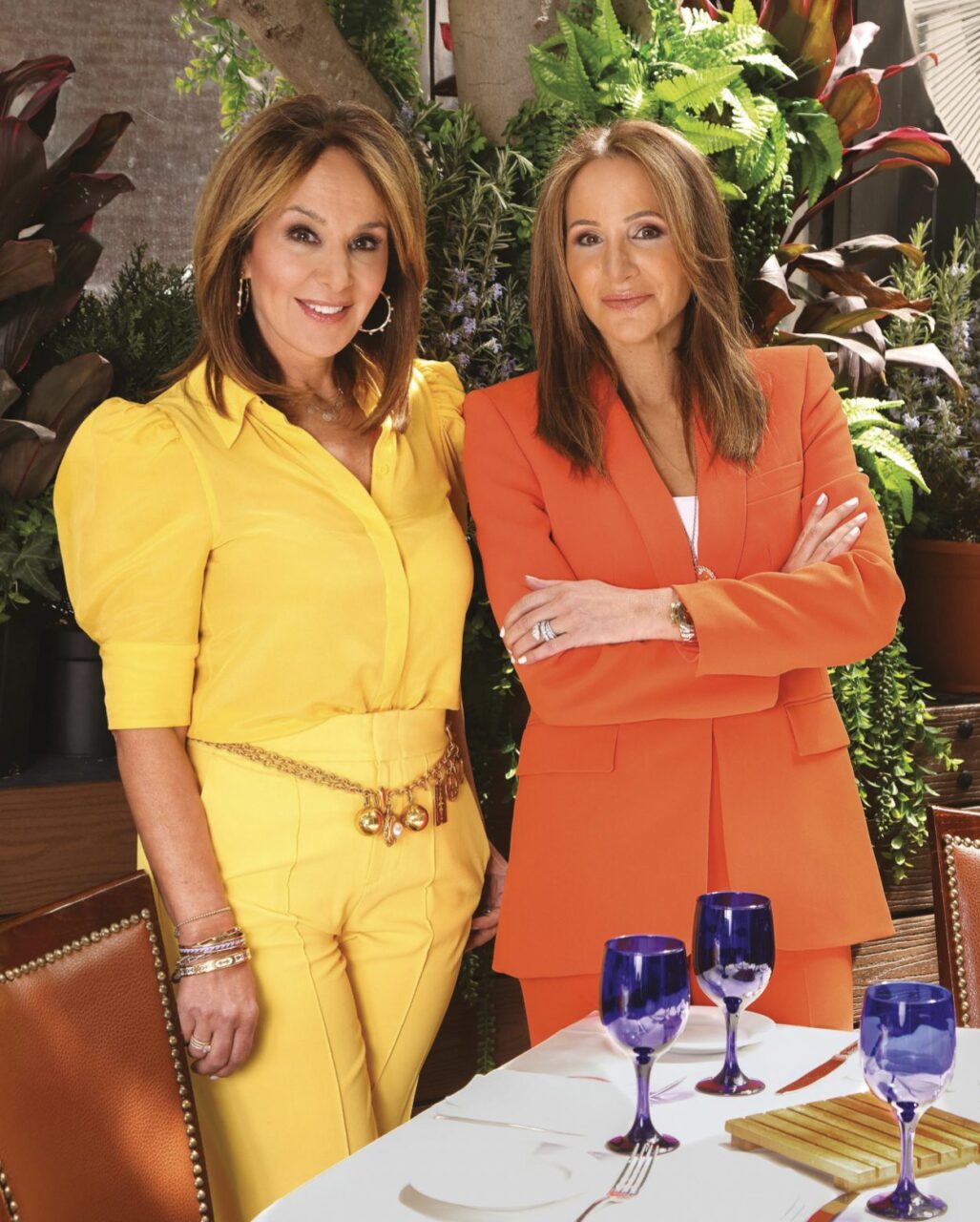 As born and bred New Yorkers, Rosanna and Elaina Scotto have a colorful and storied history that makes up the fabric NYC born to parents with had powerful mobster family ties and were highly influential in shaping the city to what it is today.  Since their opening 29 years ago, Fresco by Scottos remains a beloved New York institution with a loyal following spanning a cross section of power players in business, fashion, politics and media.  As the anchor for Fox’s Good Day New York, Rosanna Scotto greets millions of New Yorkers every morning with her candid and infectious energy that when offscreen she channels into her family’s popular restaurant, Fresco by Scotto’s.  Resident speaks to the Scotto sisters who, along with their mother Marion, have rebranded, revitalized, and relaunched Fresco by Scotto’s to become Midtown’s latest dining and dancing destination. 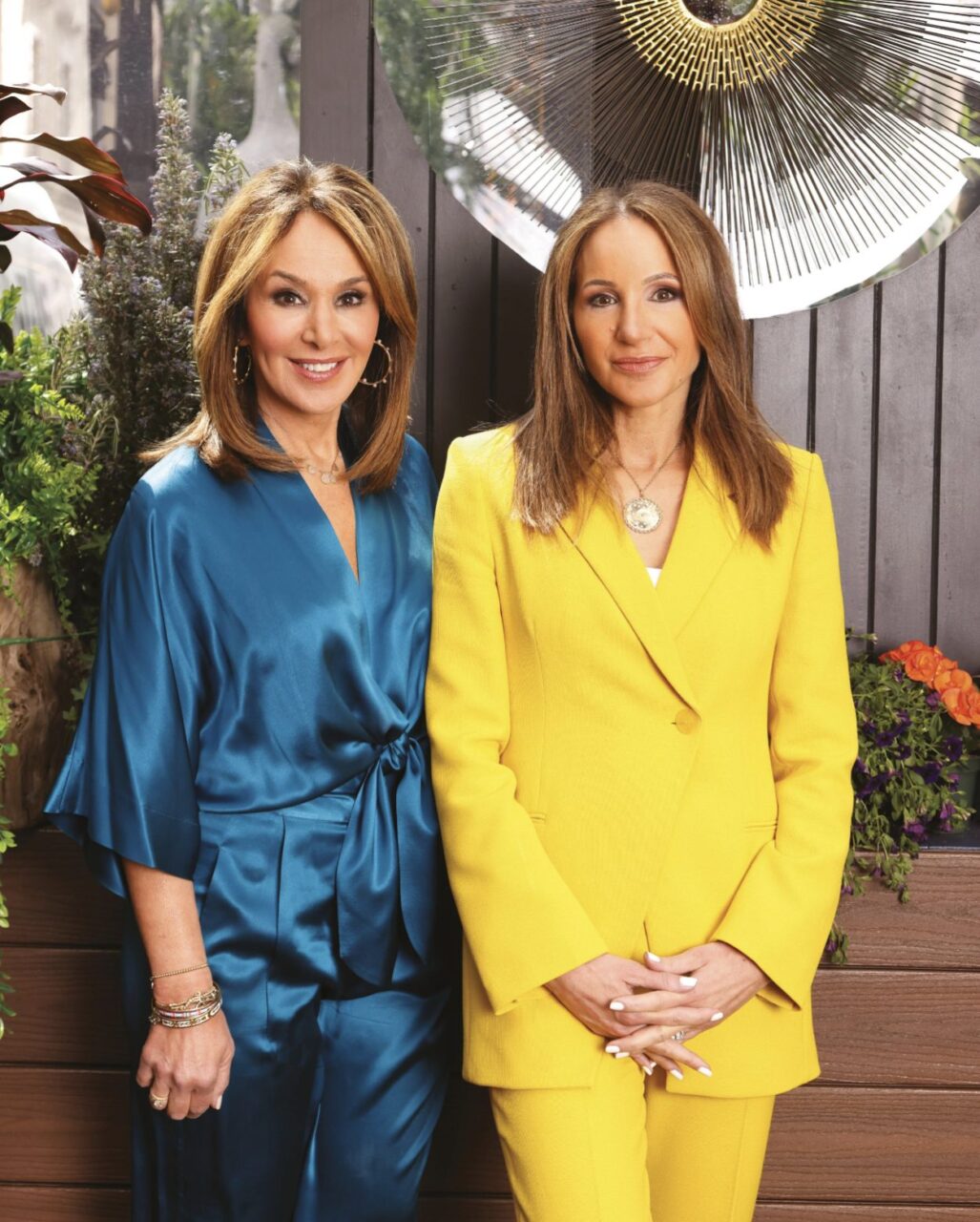 RS: Tell us a bit about the history and evolution of Scotto’s.

ES: We opened 29 years ago, and we were very fortunate to have success very early on. From the moment we opened our doors we were the home of fashionistas, politicians, and TV personalities, though there were a lot of ups and downs over that time. When COVID hit our restaurant shuttered, and to pull the plug and close up is detrimental to any running business, and we weren’t sure if we were going to reopen. Long story short, we received a lot of grants, repositioned our company as we are a 100% women owned business. We renovated the interior, and reimagined, reinvented and recreated an entirely new business. We went from being a very serious restaurant without any music where businesspeople came, to now this happy, joyful, dinner entertainment destination. We have DJs Thursday, Friday and Saturday night. We encourage people to get up and dance wherever they feel. It’s like walking into a giant party. We hired Larry Scott, event planner to the stars, and he’s recreated one of our favorite places in Capri with a modern twist. 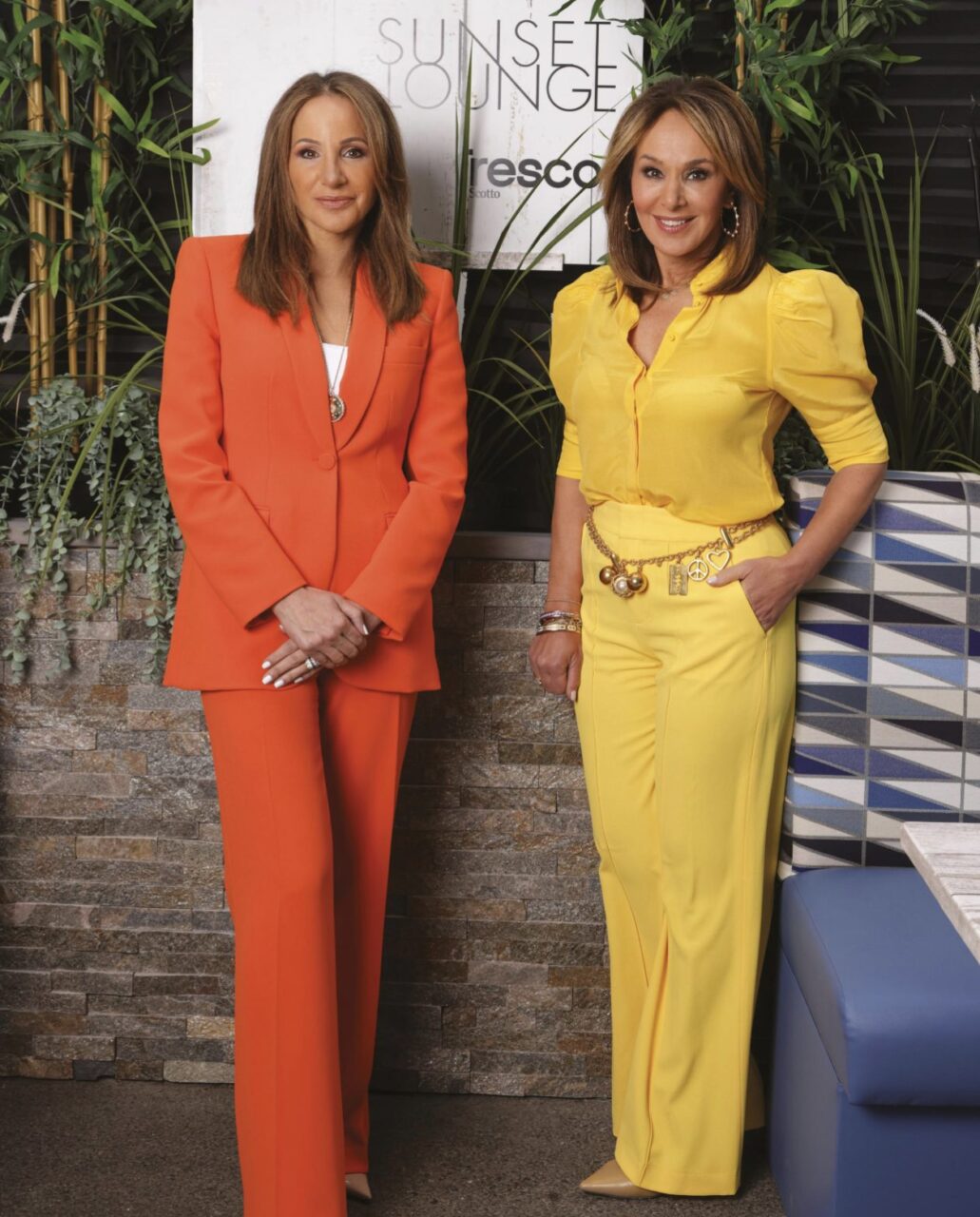 RS: We have an Instagram page for Fresco by Scotto and we have one for Scotto Sisters, In the beginning, I was posting a lot of food pictures, and we were getting a lot of response. When we started posting pictures of the partying, the dancing in the streets and the celebrities that came, we were getting an overwhelming response. People want to have fun now. They’ve been locked down for two years. We heard the call and we’re bringing it to our customers Tuesday through Saturday. Our outside area is magnificent, like you’ve gone to Europe without a passport.

RS: When did you launch your line on QVC?

ES:  When we were shuttered we did not think we were reopening, and Rosanna and I thought to create a frozen food line.  We wanted to keep ourselves busy, and occupy our mother who had been working 12 hours a day with suddenly nothing to do. Our food line consists of meatballs, lasagna, and two different types of cheesecake. And when the restaurant reopened to a huge success, QVC called and said they were ready to go on air.  We go live from our restaurant to sell our products to anyone in the country. The food is delicious. We would never sell something that wasn’t up to our standards, and we have very high standards.

RS: What are your favorite items on the menu?

ES:  Our pizzas are one of the staples from Fresco by Scotto along with our zucchini chips smothered with gorgonzola. It is so addicting. We haven’t figured out how to package that yet, but we are working on it. We would never want to sell it unless it was completely the way you get it at our restaurant.

RS: What do you love most about being a New Yorker?

ES:  We are very realistic about surviving in this town. It’s different than it was two or three years ago, and we’ve completely changed and adapted. When people come into our restaurant, they know they’re safe and they’re ready to have delicious food and party. The fact that we aren’t just any New Yorkers, people want to come here to see the Scotto family.  I don’t do the workings like Elaina and mom do, I’m more of the schmoozer.  When I go in for dinner, I spend over an hour just going around to tables, taking pictures and welcoming everybody.

RS: Do you think your recipe for success can be attributed to each person bringing a different strength to the table?

ES: Absolutely, we all we all play a different role without stepping on each other’s toes, and we work together as a team to come up with different ideas. As soon as we’re comfortable with something, we are onto the next idea. People come in to celebrate and now we have a celebratory light show where everything stops in the restaurant and all the staff comes over with giant sparklers and desserts, which turns into a major celebration. This has become our signature and it’s a lot of fun. I think the success of the restaurant is to have Instagram worthy items on your menu. We have a huge cannoli for 10 people and everybody loves it because it’s so big and you need a hammer to break it down and go to town on it. Instagram plays a big part in selling the restaurant and getting people in the door. And then when they get there, they are so happy because it lives up to the reputation.

RS: Can you tell us about your Scotto Sisters show and how that plays into the restaurant?

ES: We started Scotto Sisters informally before COVID.  During COVID Elaina and mom were basically out of work, and we were all on our own and apart, when we were so used to seeing one another.  Our viewership has grown to thousands of people who watch our show just about every day.  We produce our show Monday through Thursday at 4:30 pm and we have guests on the show live or via zoom and it’s really become quite a little show on its own. We have been approached by companies interested in sponsoring, but we haven’t gone that route yet because we want it to be authentic. Our original intent was to keep us engaged and distract us, and really to comfort us while finding strength and supporting one another to get through this very horrible time. We even call our viewers the Scotto Sisters and we get to meet them in person when they come into the restaurant. In fact, we’ve taken our Scotto Sisters schmoozing to the New York Wine and Food Festival last year we did a Scotto schmoozing lunch that was sold out. It was so much fun that the organizers of New York City Wine and Food Festival have asked us to do it again this year.

RS: What are your some of your favorite dishes?

ES: Our chef is Ben Cachuma who is young, energetic, fabulous, and so talented. We change the menu at least twice a year. From our summer menu, I love the watermelon salad and the burrata which changes every season. He has such a knack. He also makes a pasta primavera with a touch of cream and bit of lemon zest called Larry’s Lemon Cream named after Larry Scott. On the healthier side I love the salmon, branzino and the Dover sole.   We eat there for lunch and dinner every single day and never tire of the menu. Our steak is also an unsung hero at the restaurant. Diners go to steak houses because they love a great juicy piece of meat and our steak is fabulous. The chef also does a boiled meat special every night. Our chicken parmesan is perfectly pounded with a perfect amount of bread crumbs topped with homemade tomato sauce.

ES:  Our pizza and signature zucchini chips are a must, but I can’t have that alone because I will eat the whole bowl and then I’ll be mad at myself. They are highly addictive and delicious and have been on the menu for over 20 years.

RS: Do you have any summer travel plans?

ES: I will be out East in the Hamptons over the summer staying close to home this year, and will entertain at home with small dinner parties. Elaina is going to Greece while taking notes and observing the party theme to bring our place to new levels in the fall.

RS: Rosanna, what has been the most inspiring story that you covered on Good Day New York?

ES:  There have been so many of them. I think everybody has bounced back. It’s been a tough time, whether you’re going to school or have a business in New York City. What I love to see is New Yorkers coming together, supporting one another, and helping each other get back on their feet. I call this a Corona coaster, some days you’re feeling that this is great and we’re going to get through it. Then other days, you’re feeling very low. That’s when you need your support from fellow New Yorkers to say we’re going to get through this and it’s going to be okay.

RS: How do you envision the future of Fresco by Scottos?

ES: Our restaurant has been around 29 years. Before COVID, our clientele had aged, gracefully, but they were quite older. When we reinvented Fresco by Scottos with the music and dancing, not all of them came back. We needed to reinvent, because not everyone is working in Midtown and now the workforce in the office is only 8% full time. We are in a very quiet Midtown Manhattan location and we had to give people a reason to travel to Midtown. We lost a few even though a lot of them come in for lunch. For dinner we have a much younger clientele. I think the dancing will get a lot of people over there. I feel like where else can you go to have a great meal, dance in the street and still be washed and in bed by 11 o’clock? After COVID when people first started coming out, reservations were picking up at five and six o’clock. Before that it was always a seven or eight o’clock dinner. People got used to being home and eating normally. But now reservations start at five and they go till 9 pm.  Also for lunch, 12:30 used to be the hot spot, but now it’s 12 noon, with 200 diners at that time.  New Yorkers mindsets have changed a bit, but it’s probably a healthier option now. We also opened our Fresco on the Go, which is fast casual by day, and turns into a private banquet space at night.  We also opened an outdoor Cabana, where people could hold private events for up to 24 people because everyone wants to do a private party and not necessarily indoors these days.