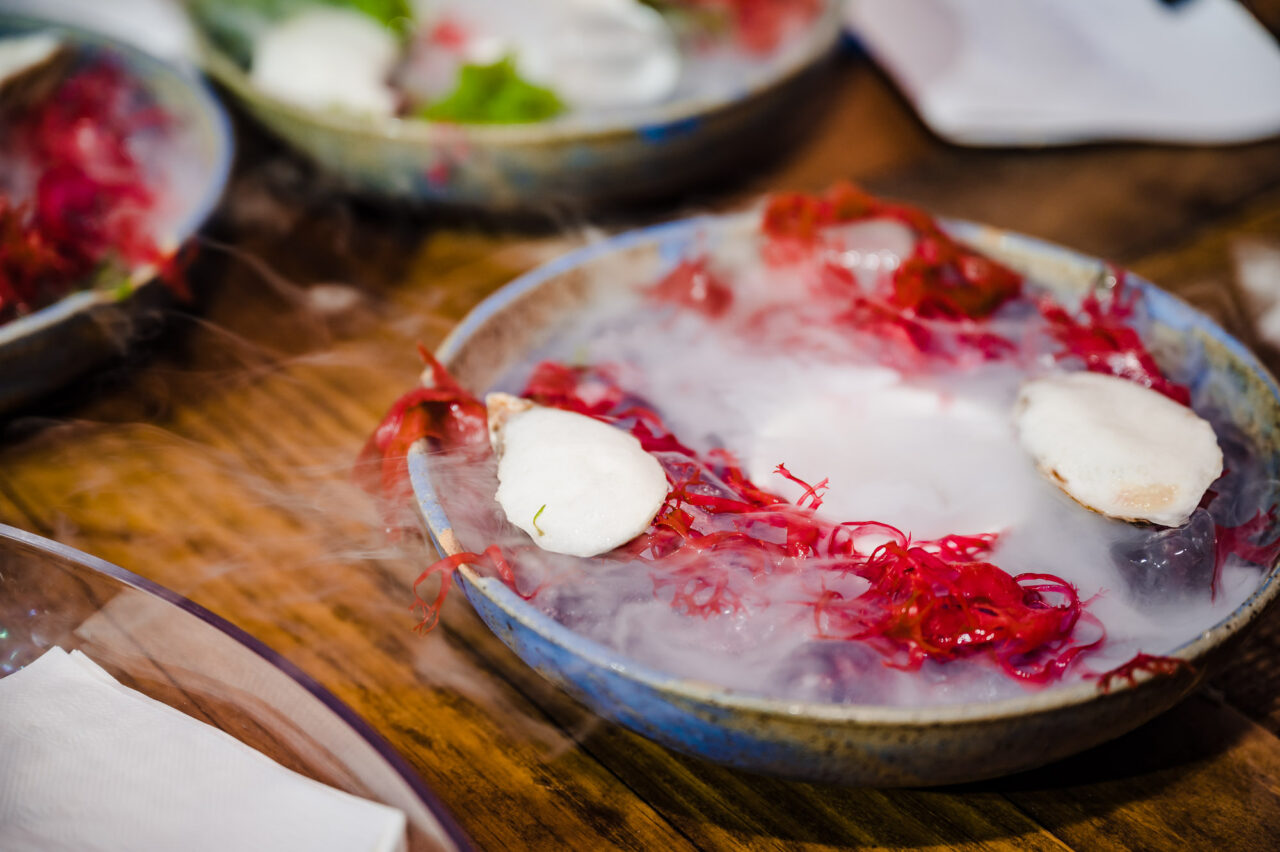 Recognized As One Of The Leading Seafood Festivals In The Country, This Year’s Four-Day Culinary Celebration Starts at Joe’s Stone Crab on October 19 and Ends on the Sands of South Beach on October 22

South Florida’s highly anticipated South Beach Seafood Festival is back for its 10th anniversary with a celebration that is gearing up to be the best yet with special programming, including a $10,000 chef prize and popular live musical guests, that will raise the bar for one of the country’s leading seafood events. From Wednesday, October 19 through Saturday, October 22, the four-day festival is a curated culinary showcase that couples South Florida’s bounty of seafood with the region’s most notable chefs and restaurants. Tickets to the 10th annual South Beach Seafood Festival are now available at sobeseafoodfest.com. 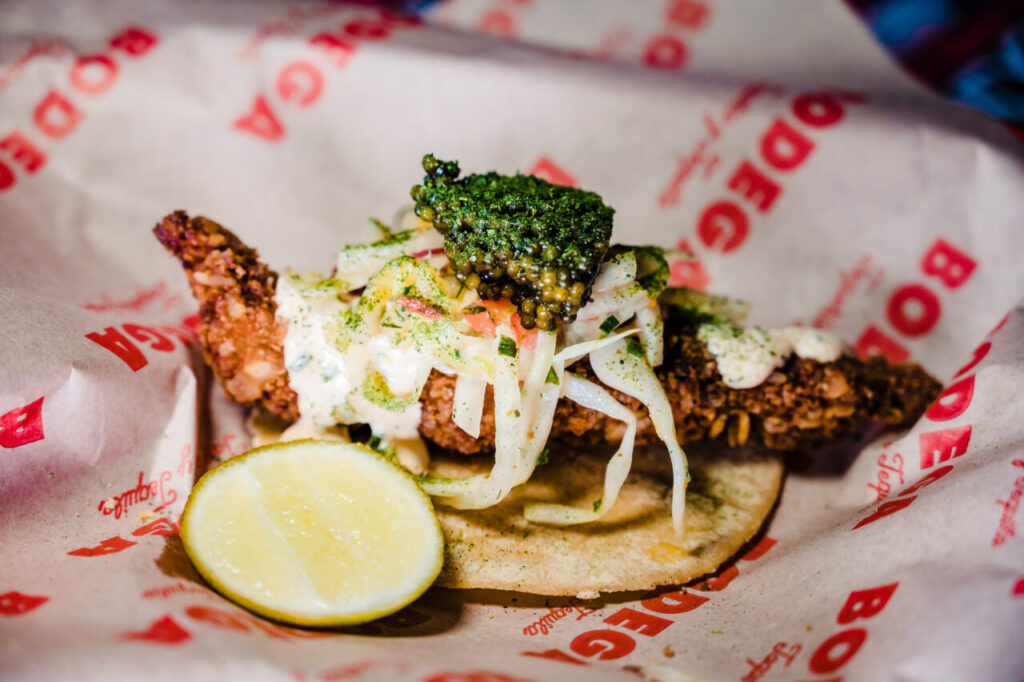 The South Beach Seafood Festival, which also kicks off Miami Beach’s famed stone crab season, consists of four separate ticketed events taking place throughout the week. The festival begins on Wednesday, October 19th with “An Evening at Joe’s Stone Crab.” The already-sold-out five-course meal showcases Executive Chef Andre Bienvenu’s cuisine paired with fine wines curated by master sommeliers. Next up, “Crabs, Slabs & Cabs,” takes place the following evening and offers a formal sit-down, five-course dinner highlighting ‘Surf n’ Turf’ reimagined by some of the Magic City’s leading chefs. The event is hosted by GOYA Foods’ Executive Chef Fernando Desa and includes participation from celebrated restaurateur and Pubbelly Sushi partner José Mendín; Fiola Miami’s Executive Chef Danny Ganem; Meat Market Executive Chef and Owner Sean Brasel; and a final chef to be announced. On Friday evening, the gloves come off as 16 of Miami’s top chefs go head-to-head in eight competitive seafood rounds during the annually sold out “Chef Showdown,” coined the ultimate beach bash on South Beach. To commemorate the festival’s 10-year anniversary, one participating chef with the most points of the night will take home a grand prize of $10,000. The series of nightly events builds up to the main celebration, the “South Beach Seafood Festival,” an all-day affair taking place on Saturday, October 22, showcasing a selection of pop-up-cafés by prominent South Florida restaurants, complimentary open bar stations, and packed with live musical performances, interactive experiences, and much more for guests to enjoy. 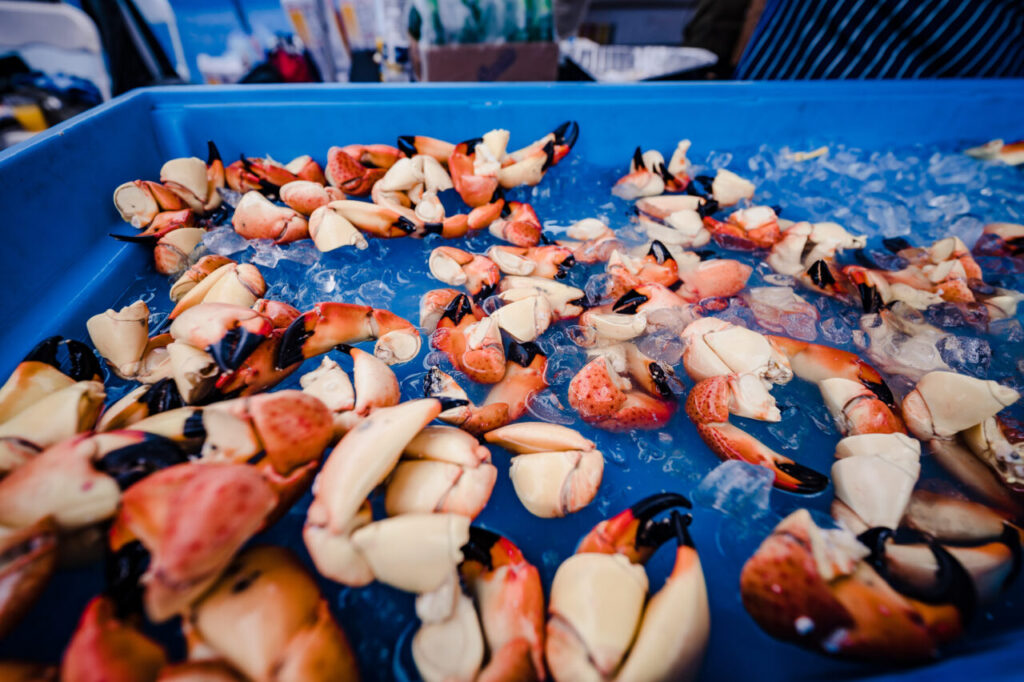 “It’s a momentous 10-year celebration for the South Beach Seafood Festival, and we are grateful for the opportunity to continue to support and shine a spotlight on South Florida’s talented chefs and restaurant community every year,” said Valerie Roy, Director of Marketing and Client Strategy at CI Management, the team behind the South Beach Seafood Festival. “We are amplifying our programming and doing things in a more significant way for year #10 to celebrate the heart of what makes South Florida a not-to-be-missed culinary destination, highlighting local culinary talent in a unique manner, adding a $10,000 prize for one lucky chef champ of our Chef Showdown event, as well as bringing in some amazing entertainment to ensure this is our best festival yet.”

Touted in previous years by USA TODAY as one of the “Top 5 Specialty Festivals in The Country;” by Forbes as the “Top 5 Things to Do This Fall;” and by the Travel Channel as the “Best Seafood Festival in the US,”, the South Beach Seafood Festival is the place to be for the ultimate ‘sea foodies’ from near and far. In addition to celebrating regional culinary talent, the festival annually supports CI Foundation’s EAT SMART program, a 501 ©(3) nonprofit program that provides healthy meals and nutritional guidance to the local community and Florida’s youth through programs in Miami-Dade County public schools. 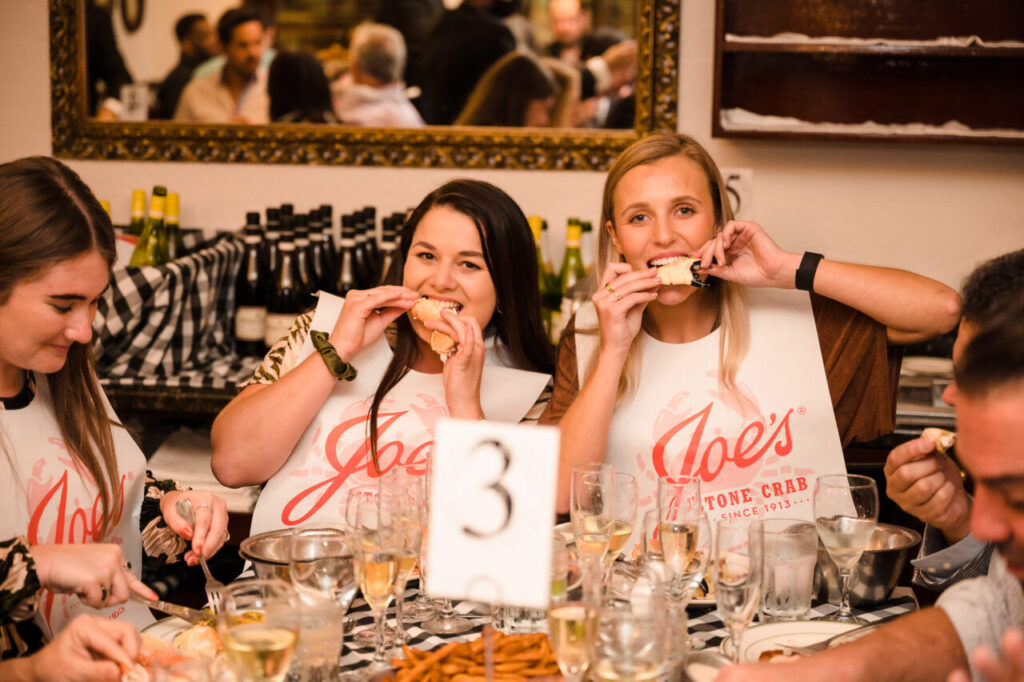 A ticket to “An Evening at Joe’s” reserves a seat in ‘Jesse’s Room’, the original setting in which greats like Al Capone and Frank Sinatra cracked claws. Guests will travel back in time with Joe’s Stone Crab’s General Manager, Brian Johnson, basking in the iconic history of the country’s top grossing restaurant, while learning to crack the perfect claw and enjoying the world’s freshest stone crab catch. The evening consists of a five-course meal showcasing Executive Chef Andre Bienvenu’s cuisine paired with fine wines curated by master sommeliers, hosted by Brown Forman. Tickets to the highly exclusive event are available for $500. 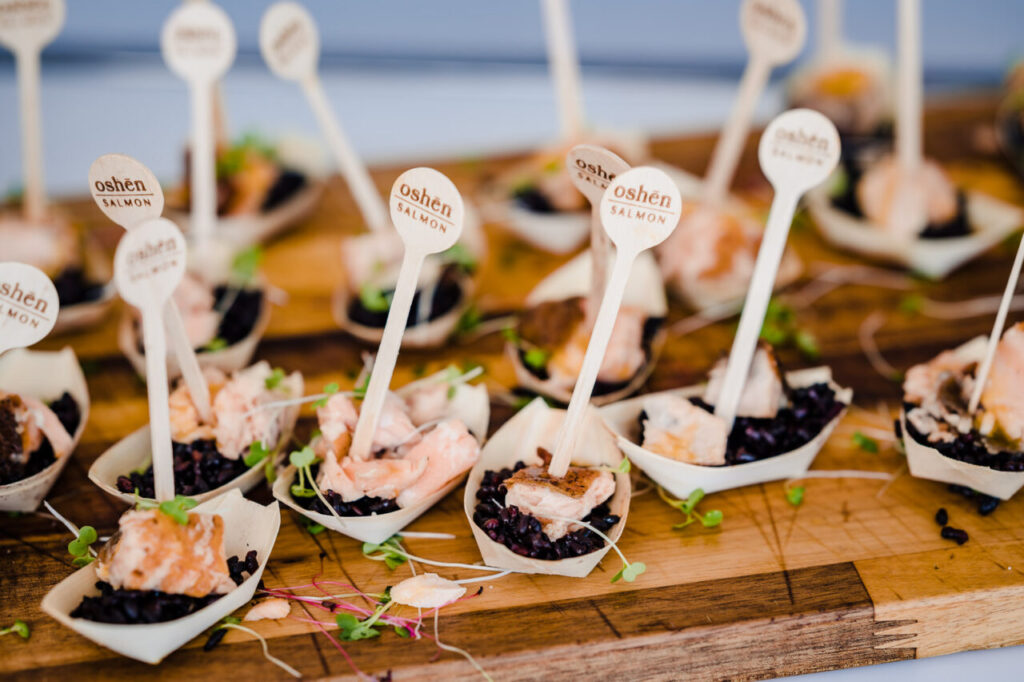 Taking place at the High Tide beach club at Miami’s iconic and recently revamped Kimpton Surfcomber Hotel, “Crabs, Slabs, & Cabs” is a formal sit-down, five-course dinner and a once in a lifetime dining experience in a tropical oasis set for the ultimate seafood extraordinaire. Some of Miami’s finest chefs will join forces with GOYA’s Executive Chef, Fernando Desa, to create their own unique take on the traditional ‘surf n’ turf’ dish. Participating chefs include celebrated restaurateur José Mendín; Fiola Miami’s Executive Chef Danny Ganem; Meat Market Executive Chef and Owner Sean Brasel; Chef Javier Carballo of The Social Club at Surfcomber; and Luca Osteria’s chef and owner Giorgio Rapicavoli. Limited to 150 guests, attendees will explore flavors from around the world as each chef presents a different course showcasing their own interpretation of the delicious surf n turf pairing. 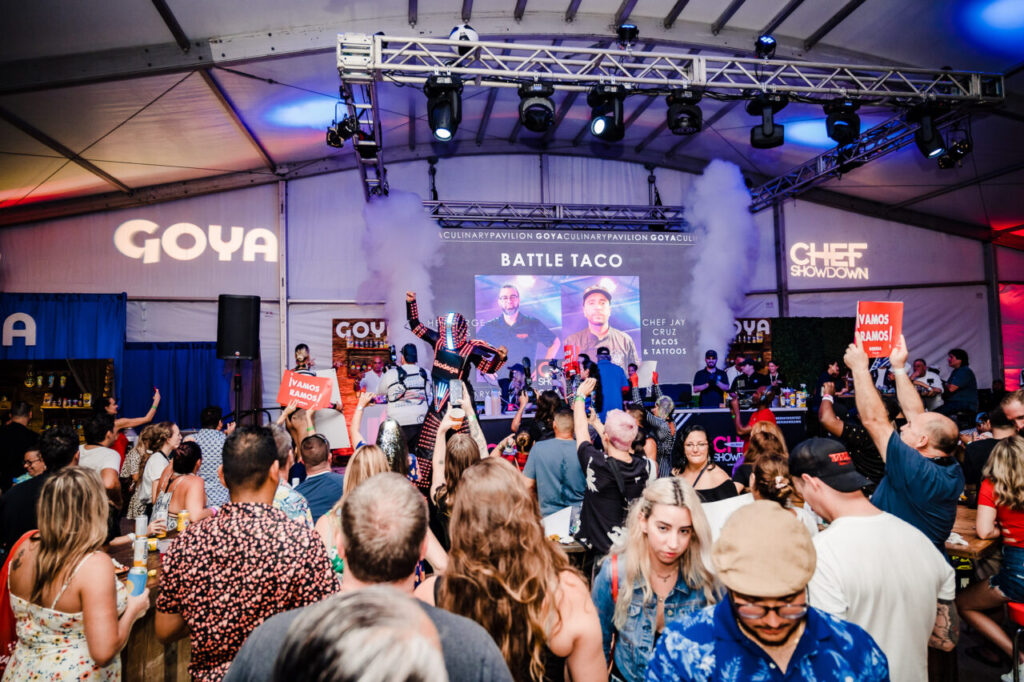 Join Miami’s top chefs for an evening of competitive culinary cook-offs where attendees will serve as the judges as they indulge in endless seafood dishes and refreshing cocktails. “Chef Showdown”, brought to you by Herradura and presented in the GOYA Culinary Pavilion and Baptist Health Hospitality Village, will guide guests through the absolute best of Miami’s culinary scene where 16 chefs will battle it out head-to-head in eight unique seafood showdowns. Chefs will host ‘battle pavilions’ where guests will sample and vote for their favorites. Throughout the night, chefs from each battle will take the main stage to put on a show in their live demos as representatives from the culinary industry, including media, will serve as the final judges to award the best in each showdown. Previous years have seen chefs featured with Mariachi bands, LED Robots, Acrobats, Miami Heat dancers, and more as they wow the crowd with their restaurant’s traditions as they prepare their dishes on stage. Each battle will have one lucky champ. And new this year, one MVP will be selected as the overall winner and take home a prize of $10,000. Previous winners returning to defend their titles include Bodega Taqueria y Tequila’s Jorge Ramos (Battle Taco); Beaker & Gray’s Brian Nasajon (Battle Crab); Rusty Pelican’s Jim Pastor (Battle Surf N’ Turf); Mercato Della Pescheria’s Alex Martinez (Oshen Battle Salmon); JRK!’s Wayne Sharpe (Battle Shrimp); and Uchi Miami’s Cristian Canencio (Battle Oyster).

The main event, brought to you by Herradura, presented by Goya Foods and City National Bank, and hosted by City of Miami Beach, spans four blocks on the sands of South Beach and will feature a selection of curated pop-up cafés created by some of Miami’s finest seafood restaurants. In addition to an assortment of restaurant pop-ups and complimentary all-day open bars for all ticketed guests at the general admission and VIP admission level, the beachfront festival will also include the Demesmin & Dover live music stages, interactive sponsor experiences, beach games, and much more. In past years, pop-ups included cafés from Joe’s Stone Crab, RED South Beach, The Lobster SHACK, Pubbelly Sushi, Ella’s Oyster Bar, Tacos and Tattoos, Stiltsville Fish Bar, and many more with over 70 menu items to choose from. Attendees will enjoy shareable portions of stone crabs, lobster waffle cones, steak and lobster skewers, ceviche, oysters, shrimp tacos, and shrimp cocktails among others. VIP ticket holders will gain access to a one-and-a-half block private village with exclusive experiences, private samplings, and more set for the ultimate VIP guest. 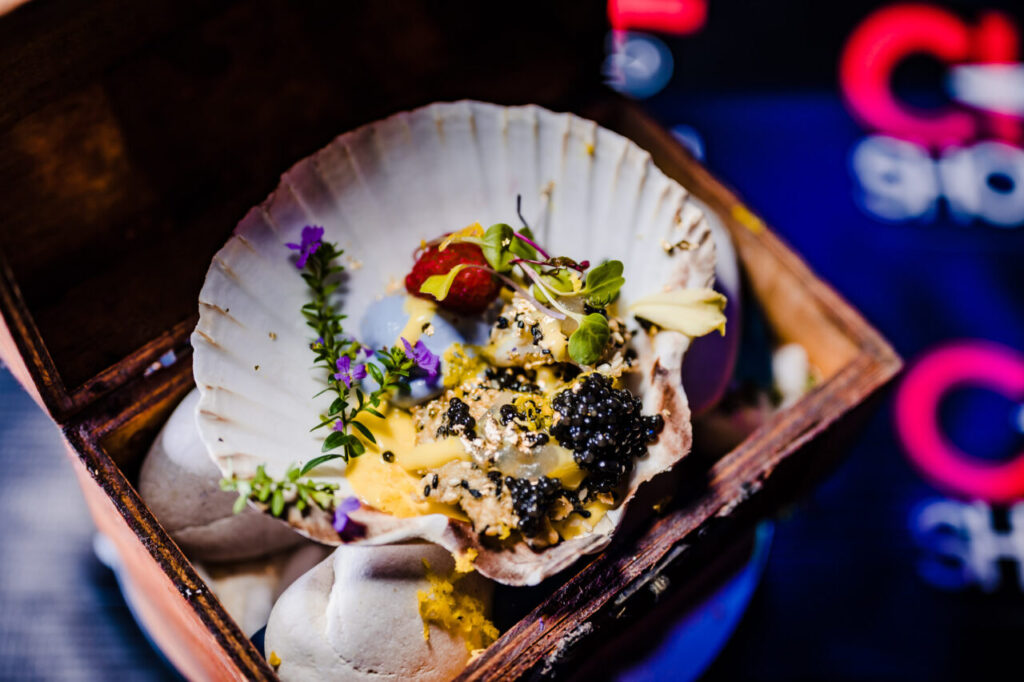 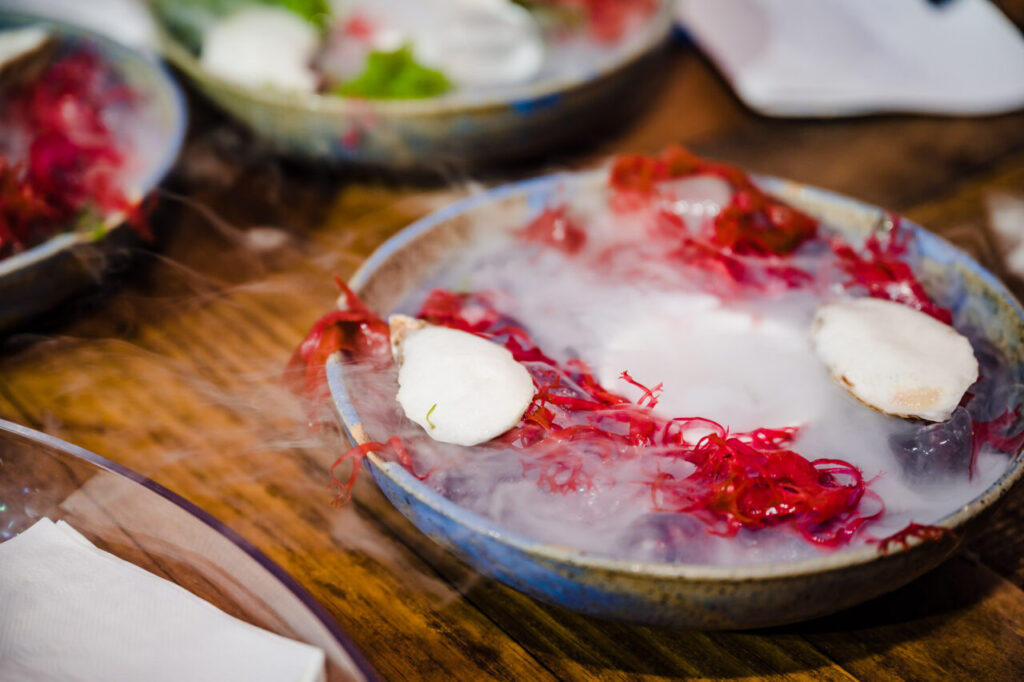 South Beach Seafood Festival’s host hotel for 2022 is the newly revamped Kimpton Surfcomber Hotel, located at 1717 Collins Avenue. Limited Weekend passes are available for $250 per person. Hotel Packages for two with weekend tickets and a festival room are available for $1,100.