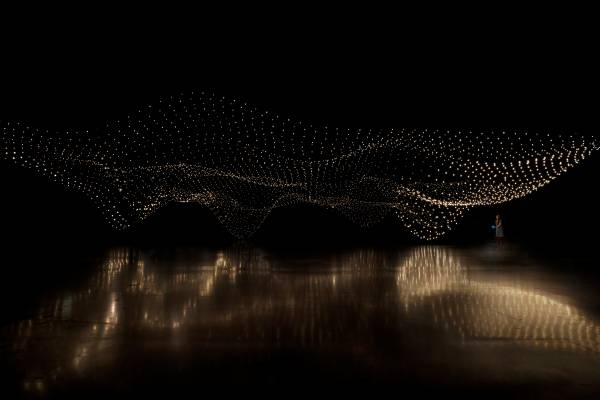 As spectacular as it is meaningful, Pulse Topology is an immersive biometric artwork consisting of 3,000 suspended light bulbs, each of which glimmers to the heartbeat of different participants. As visitors traverse a series of crests and valleys of pulsing lights at Superblue, sensors detect and record new heartbeats, which replace the oldest ones, creating a memento mori in which the trace of individual heartbeats gains poetic strength as a powerful choir of human connection.

Recognized for his participatory installations, Lozano-Hemmer’s works are activated by participants’ real-time biometric data such as their heartbeats, breaths, voices or fingerprints – pushing the nature of public engagement to its very limits.

Inspired by conversations with BMW engineers and designers and in the spirit of true cross-disciplinary collaboration, Lozano-Hemmer’s studio will apply the technology behind Pulse Topology to visualize heartbeats through light, sound, and graphics inside the first-ever fully-electric BMW i7 sedan. This additional exhibit with BMW’s all-electric flagship vehicle will be available for visitors to experience at Superblue Miami from November 28 – December 4, 2022 during Art Basel in Miami Beach.

Pulse Topology is the culmination of the biometric series of artworks that Lozano-Hemmer first exhibited internationally at the Venice Biennale. It serves as the second installation in Superblue’s Suspension program – a rotating series of site-specific artworks that are activated through community engagement, alongside immersive installations by leading global contemporary artists Es Devlin, teamLab, and James Turrell.

Pulse Topology is available for public viewing from November 2022-August 2023.

About Superblue Miami
Supporting the voices and visions of contemporary artists to bring to life their artistic creations, Superblue curates immersive experiences that catalyze shared human connection and engagement that fascinates, changes, and enlightens audiences. The center opened in 2021 in Miami’s historically diverse and rapidly up-and-coming arts neighborhood of Allapattah. Superblue’s inaugural show, Every Wall Is a Door, offers visitors an unparalleled opportunity to be transported to an array of new worlds in a single visit through dynamic installations created by three of the world’s leading experiential artists — Es Devlin, teamLab, and James Turrell. One of the most exciting additions to the arts and entertainment ecosystem of Miami, Superblue Miami will continue to showcase world-class art of spectacular proportions.

Superblue Miami is open seven days a week, Sunday, 10am-7pm, Monday-Thursday, 11am-7pm, Friday-Saturday, 10am-8pm. Tickets start at $36 and are available to purchase at superblue.com. Superblue Miami is located in the neighborhood of Allapattah located at 1101 NW 23 Street, Miami, FL off I-95, I-195 and the metro rail that connects with Brightline downtown.

About Rafael Lozano-Hemmer
Rafael Lozano-Hemmer (born in Mexico City 1967, lives and works in Montréal, Québec, Canada) was the first artist to officially represent Mexico at the Venice Biennale in 2007 with a solo exhibition at Palazzo Van Axel. He has also exhibited in dozens of other biennials including Sydney, Liverpool, Shanghai, Havana, Istanbul, Kochi and Singapore. In the past few years, Lozano-Hemmer has been the subject of 13 solo exhibitions worldwide, including a major show at the Hirshhorn Museum in Washington DC, the inaugural show at the AmorePacific Museum in Seoul, and a mid-career retrospective co-produced by the Musée d’Art Contemporain de Montréal and SFMOMA. Notable projects include Border Tuner (2019), interactive light “bridges” that enabled conversations between communities on either side of the US/Mexico border; Cloud Display (2019), a voice-recognition fountain that writes texts in midair using cold water vapor and A Crack in the Hourglass (2021), an “anti-monument” where photographs of those who lost their lives to COVID-19 are drawn in hourglass sand, creating an ever-changing memorial that honors both the collective and the individual, recently on view at the Brooklyn Museum of Art.

Lozano-Hemmer has received multiple awards including two BAFTA British Academy Awards for Interactive Art (2002 and 2003), a Bauhaus Award (2002), a Golden Nica (2000), a Trophée des Lumières (2004) and the Governor General’s Award in Visual and Media Arts (2015). His work is in the permanent collections of MoMA and the Guggenheim, New York; SFMOMA, San Francisco; Fundación Jumex and MUAC, Mexico City; and Tate, London.

About BMW Group Cultural Engagement
Why Culture? Why not! Culture is knowledge, a sanctuary of beauty and depth, of meaning and peace. An inspiring escape. Tranquil at best, even unsettling sometimes. As a corporate citizen, the BMW Group takes social responsibility seriously, as part of which it has been involved in hundreds of cultural initiatives worldwide for over half a century, both in the arts, music & sound, architecture as well as in design. As a long-term partner, creative freedom is key – and as essential for groundbreaking works as it is for major innovations within a business enterprise like ours.