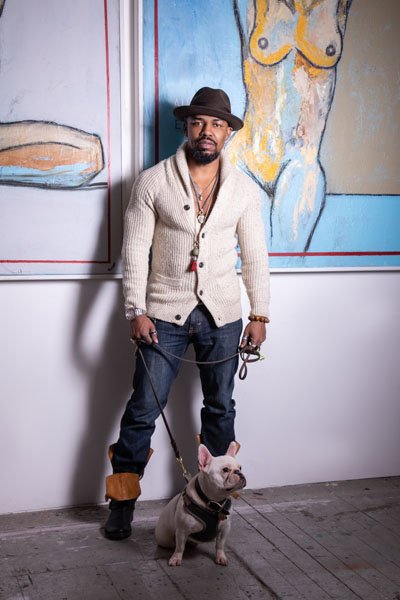 Artist Guy Philoche wants to bring color to your walls – and to your life! This Haitian-born artist, whose work is inspired by the vibrant shades of his Caribbean background, also brings about feelings of nostalgia, but with a New York twist, with every brushstroke!

This cutting-edge creative is a pro at painting pictures that evoke childhood sentiments – only your childhood didn’t look this cool or edgy! For his Game series, this artsy artist painted old classic board games such as Checkers and Monopoly and made them look well-played and vintage; plus, he made a sculpture for each playing piece. It’s no wonder they became such a huge hit! He might be an ahead-of-his-time artist, but Philoche was also inspired by those earlier times growing up “when we took the phone off the hook on Sunday night and had game night and ate dinner together as a family and talked about our day.”

Philoche, an ingenious innovator who attended art school at Yale, had already painted an image in his mind of what he wanted to become in the third grade upon taking a class trip to a museum where he was exposed to the masters as well as to contemporary artists. While he was lucky enough to know what he wanted to do at a young age, Philoche’s passion also plagued him. 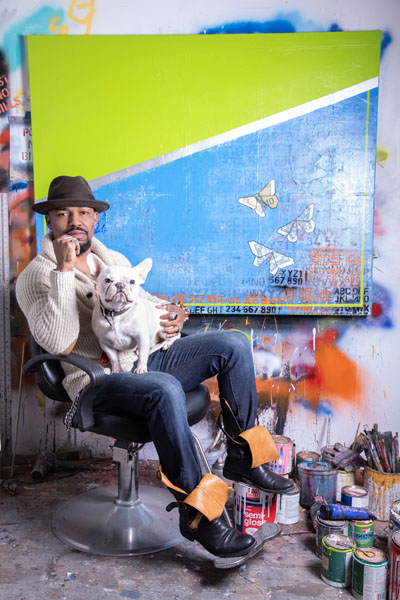 “Imagine being so young and focused and all you care about is making art and being in the MoMA, like a racehorse with blinders. You have to make a lot of sacrifices.”

Philoche’s collectors are very glad he found his creative calling, and his paintings now hang in private homes as well as corporate collections. This passionate painter who thinks outside the box – or the canvas – brings about beauty with every stroke of his brush. His images make you see and feel things beyond what’s in front of you. Philoche says, “I’m very grateful that my collectors and dealers allow me to grow as an artist. Artists get stuck painting the same thing because it sells, but I’ve been allowed to evolve and take things to a different level and to try new things. They’ve really believed in me and in my vision, and they have given me the freedom to experiment throughout my career.”

This pioneering painter is always pushing the envelope, and he has garnered many comments from his No Comment series, which some galleries deemed too edgy and controversial at the time. Fast forward eight years later, and with the birth of the Me Too movement, these artworks are now being praised for what they always were: beautiful and powerful pieces that were ahead of their time. 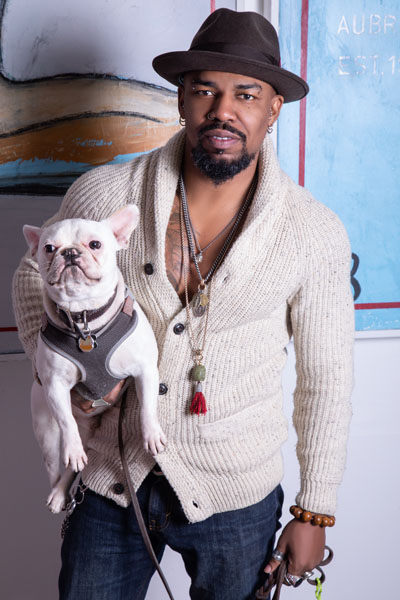 “It’s funny that I made these years ago, and they’re basically women with high-profile jobs who can’t get ahead because of that boys club thing, and no one wanted to touch it; it featured nudes and mouths covered. Those same galleries that said they were controversial now say the paintings are amazing and make such strong statements.”

Painting is an inextricable part of Philoche, and his relationship with art has truly consumed him personally and professionally. He explains, “Art showed me everything I needed to know but also took everything away that I know.” This evolving and experimental original, who grew up in Connecticut after moving to the US as a young boy, continues to put paint with passion. He has just introduced his new series, Come Fly with Me, which is already taking off! These pieces feature origami two-dollar-bill butterflies reminiscent of those childhood days filled with throwing paper airplanes out of windows. Just like many of his other paintings, Philoche is inspired by nostalgia mixed with his cutting-edge ideas, which he credits to the constant inspiration he finds all around him, resulting in rich textures and even richer insights packed into each painting.

“When I was 13, my dad bought me a wallet; inside was a two-dollar bill for good luck. It became really important to me, so I’ve put these elements into the new series. Come Fly with Me has been a big hit, so right now I’m still allowing the process to happen, and I want to see how far I can take it. There’s really cool stuff; the background of the painting is constantly evolving. That’s the thing about New York City – when I see something that’s really cool, I try to incorporate it.  Some of my other paintings are structured or all the same, but this is all about evolving.” 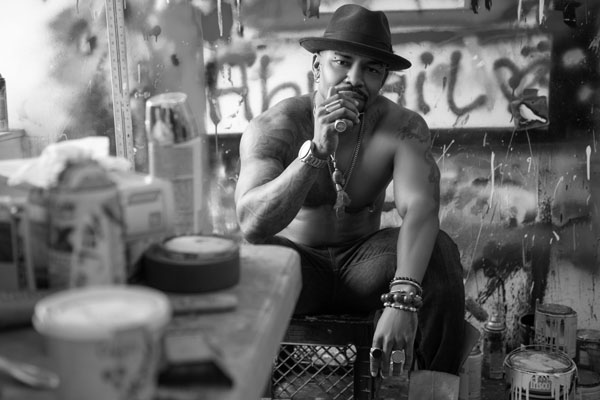 When you check out this latest series, you’ll see things in a new light – and with new colors! Philoche’s lush surfaces were inspired by how he views his adopted city, including the buildup of city walls, thick with traces of wheatpasted posters, advertisements, tagging and graffiti. Paper airplanes made from collaged reproductions of dollars and euros come zipping through the frames, leaving their swirling trails behind them in great looping gestures. Philoche’s innovative imagination employs the flippant use of $100 bills for paper airplanes, perhaps tossed unceremoniously from a window, exposing the bill for what it is: an abstract sign with no inherent material value once it has been detached from its system of circulation.

The paintings’ irreverence for the sanctity of the dollar is matched by their playful interrogation of the modernist grid, now reduced to a single diagonal. The grid’s claims to universal, transcendental signification are undermined by the darting in and out of the paper planes, shot between the viewer and the sanctified field of vision. Philoche’s playful, nostalgic planes suggest both the mediating function of money, as it intervenes in all social and aesthetic relationships, and the absurdity of turning currency itself into the ultimate goal.

This artist’s advice for others in the industry who also wish to have a successful unstarving artist career, is this: “Keep painting what you paint; it’s like the fashion world. Don’t just try to do trendy art; it won’t last. You have to network and go out there and always meet potential collectors and go to the right parties. Being an artist is something I wouldn’t recommend for my worst enemy, but if that’s your calling, be prepared to do the work, be prepared to put yourself out there, and be prepared for the highs and the lows. I don’t think of success as one big break. It’s a lot of smaller stepping stones.” While he’s already achieved tremendous success with his highly sought-after works, which are coveted by both old and new collectors, Philoche is still chasing the dream. He said, “My ultimate goal is to be on the fifth floor of the MoMA next to a Rothko,” which he is well on his way to achieving, one stroke at a time! 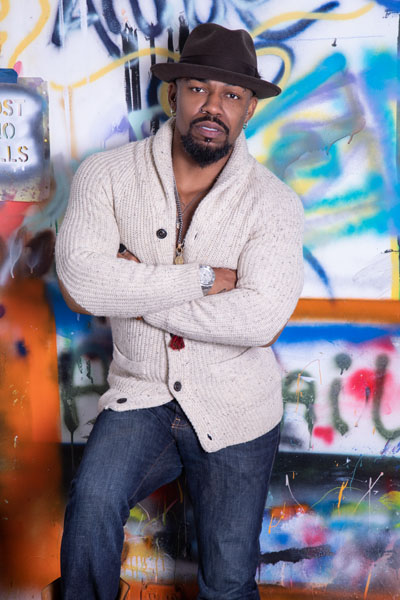 Aside from evoking nostalgia in his work, Philoche is also nostalgic for the days when he could walk into a gallery and the owner would introduce himself and take the time to look at his work. Now, he tells fellow and upcoming artists, “It’s all about hiring a good publicist. The world has changed so much in the past twenty years; you can’t just go into a gallery anymore and pitch yourself.” Philoche, who now has his own studio on the Upper East Side featuring his thought-provoking and mind-blowing masterpieces, is represented by galleries in Connecticut and Bridgehampton. He has also harnessed the powers of hashtagging and social media to spark a conversation about his visionary works worldwide.

Philoche, who believes you should buy art “because it talks to you,” has indeed made his works talk – in a good way – to many collectors, from young finance and tech guys to serious collectors and art consultants. This brushstroke genius is also a businessman, and he says, “I consider myself the CEO of my company and of my brand, and as the CEO and owner, I need to make sure my shareholders, my collectors, are happy and are seeing my work go up in value. My success has not happened overnight; we’re talking about twenty years in the making from networking and group shows and charity events and cool things I did where I met certain people.”

Aside from being a dedicated artist, Philoche has a pretty decent art collection of his own. “New York has been real good to me, so when I sell a painting, I buy a painting. My walls are covered with art,” he said. When he’s not mixing paints, this artist makes sure to give back and is committed to helping save art programs in city schools. After all, Philoche credits art with “saving my life.” This artist, who grew up in a sports-oriented family, explained, “I hate hearing, especially in the city, when an art department gets cut. What they’re telling people is that basketball is more important than the arts. I try to do my part and donate a painting to raise money to keep the program alive. I always donate a really good piece – one side is I want to donate really good work so a lot of money can be raised, but I also want to spark a bidding war so people will come to my studio.”

If you were smart, you would have already purchased Philoche’s art, but don’t fret; he is still displaying some of his best ones yet – just make sure you get them before he winds up in the MoMA, which will probably be sooner than later! When it comes to appreciating life, Philoche wants you to live in the moment and pay attention to what’s around you, including art – especially his. Trust us, you’ll be glad you did! Make sure to check out his latest collection of Come Fly with Me and be transported to a place of nostalgic memories and contemplation – you never know where it might take you!