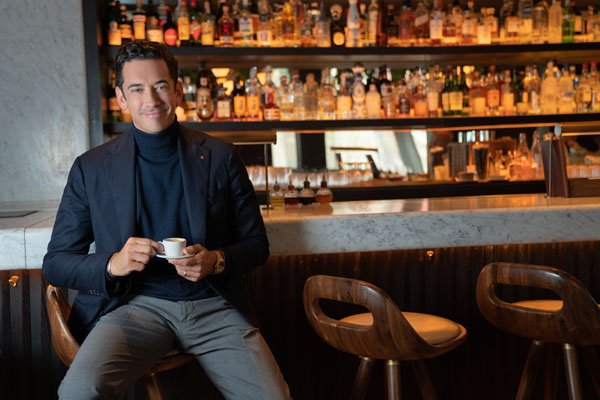 As one of New York City’s leading restaurateurs, John Meadow is the founder and president of LDV Hospitality. At the heart of LDV Hospitality is the hot-spot Scarpetta, which has grown from its original Meatpacking District location to six different outposts with 20 different restaurants and bars in different cities, with even more planned worldwide. Resident Magazine speaks to John Meadow about his plans for growth, his secrets for success, and his famous spaghetti pomodoro, which put Scarpetta on the map.

How did you start LDV?

LDV was formed in 2008 with the first Scarpetta location in the Meatpacking District. It stands for La Dolce Vita in Italian because for me, it is about an everyday charming sweet life. This is the thread that represents our passion and goal in our restaurants whether it’s Dolce, Corso Coffee, Seville or Scarpetta. It’s about bringing the sweet life and old hospitality to our guests.

How did you get started in the hospitality industry?

I always wanted to be in this industry. I had dreams of grandeur to own the Plaza Hotel. I went to Cornell University for graduate school and later worked at the Plaza for 2 years and realized that my passion was to create and tap into my entrepreneurial spirit. In 2004, I was 24 and opened my first bar by Madison Square Garden. It was a success; later, I took a lease in the Meatpacking District, which was an utter failure. We gave it one more shot and named it Scarpetta; it won the James Beard Foundation Best Restaurant in the country and received three stars from the New York Times. We have since grown to open in the Fontainebleau in Miami and in the Cosmopolitan in Las Vegas. 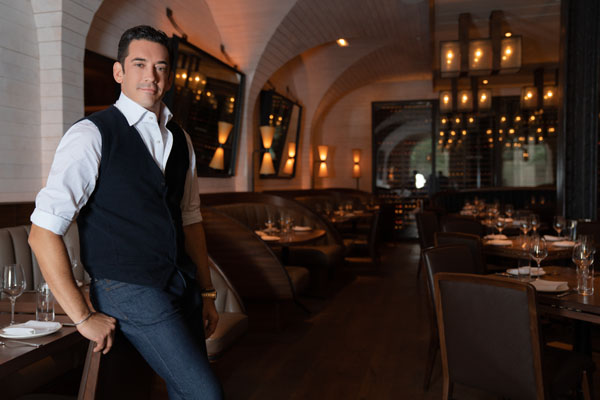 What is your secret to success?

It’s two parts: trying really hard and not being afraid of taking your shots and also having a good team around you. We’ve had plenty of failures, but we keep going. Our lease was up on 14th Street, so we had to move the restaurant, which was the scariest and most intimidating thing in my career. But quite frankly, it’s been the best opening of my career. You have to push and take your chances. You can’t just say the city of New York is too expensive; it does no good. Go forward, push, motivate and cultivate a good group around you. We employ nearly 125 people and they make Scarpetta. I had a fundamental role in it, but on a day-to-day basis, it’s that wonderful group that makes the experience special.

How do you choose your locations?

Historically, I’ve been rather reckless. I’m a deal junkie, and that’s why I’ve done so many deals. I’m still a romantic, and I always get excited to open a new location. We’ve grown to eight different cities. At this juncture, I’ve learned that less is more, so I choose projects of the appropriate scale and scope, while identifying our core consumer. Fish where your fish are; don’t go out of your realm. We’ve built so many things outside of our core, and I’ve learned that grinds on your business. The proximity to home is very meaningful.

Do you prefer to be in hotels?

Our six Scarpetta locations are in hotels. Our business as a company is in hotels. I always wanted to be in the hotel business, and part of the compelling reason to be in hotels was for the restaurants to be in the public social form. I always saw the romance in that. Our intent has always been to be in hotel F&B and to play a critical role in bringing the hotel asset to life. The restaurant is where the local community comes and engages. We’re very fortunate that we’ve been able to find that authentic restaurant space to make the pivot into the hotel space. 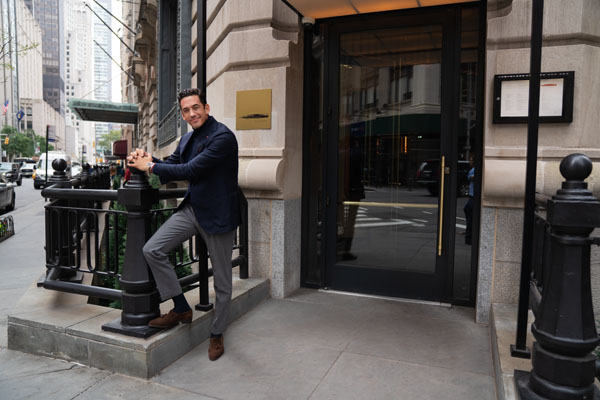 What do you love most about being in NYC?

New York has a wonderful mix of people. It’s an eclectic frenetic energy. It’s exciting and every day is different. It’s like humanity amplified. There’s no other city our headquarters would be in. We grew outside of NY for a reason, and we’re very proud of those restaurants and the team members who make up those restaurants. NY is home, and having restaurants here is far more meaningful than business.

What about the lounge/ nightclub concept?

We’ve had other lounges and nightclubs. We did the Cannes Film Festival and we’ve done nightlife. Seville was the first nightlife concept we did on our own terms. We’re restaurant people and approached it from the concept of a restaurant to give it an authentic experience with live music that opens daily. We don’t just sell aspirational exclusivity. Seville has a sexy indulgent nightlife feel to it that is socially dynamic and active at the same time. There’s a wonderful synergy about having dinner upstairs and later going to Seville.

What is your signature dish?

It’s always been spaghetti pomodoro basil. Scarpetta is derived from the phrase fare di scarpetta, which means “little shoe” but references a homey gesture. To make scarpetta at home, you break off the end of the bread, dip it in grandma’s sauce and eat it. Nothing could be more domestic. The reason why we named it Scarpetta was that it represented that oxymoron between the high and low balance between something totally comfortable and casual yet in a high-end, aspirational setting with warmth in a formal setting. No dish better exemplifies this simple elegance other than this basic classic spaghetti dish. It’s about very simple ingredients coming together in an elegant fashion. Everything in that dish is handmade.

What are your next projects?

We have five exciting hotel projects in our pipeline. One of them is in London, and all are in A+ markets.

Where do you like to go out in NYC?

I live in the Upper West Side, which is my cocoon, and on the weekends, I try not to leave. I’m right next to the park and live in the building my wife grew up in, so my in-laws are downstairs. My father grew up two blocks away, so it’s a very nice, close-knit feel. We also have a home in Southampton. My greatest passion is our London project, so I’m there once a week, and then its only two hours to Florence, so I go there for dinner and come back. I love the proximity to so much in Europe. One of my greatest thrills is to book a 24-hour whirlwind tour to Europe so I can see my friends there and find the right restaurants. I’m an avid traveler. 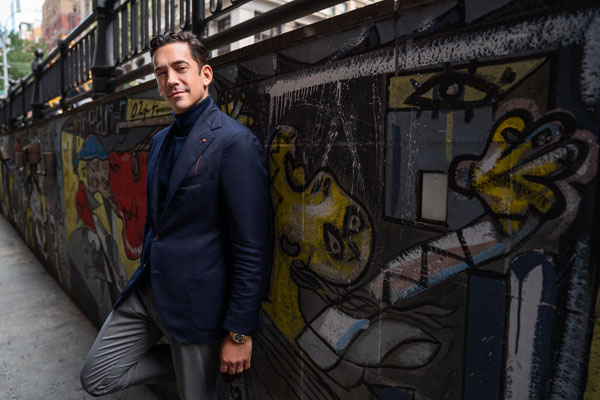 How did you partner with Domingo Zapata for the mural that adorns Seville?

Domingo has always been a friend. I love his art, but his persona and energy make him such a beautiful, vibrant person. When the building was originally constructed, it was known as Hotel Seville. We wanted to go back to the New York Art Deco roots. With the idea of Seville as a Spanish city and Domingo being a Spaniard, we felt no one spoke to classic Spain in NYC better than Domingo. He’s a sensational artist, and we commissioned him to create the mural depicting his version of Picasso’s Guernica. It has a wonderful balance of an eclectic yet gritty and technically valid feel. For us, it’s important that LDV doesn’t just exist for a super high-end aspirational audience; there are moments of it, but it’s all about the high-low balance. Our mantra is to engage in the LDV lifestyle every day, all day long, and Domingo definitely gets that. It’s important to work with like-minded people because this is all about passion. If you don’t have that, none of this makes sense.

I’m grateful for the last 10 years of wins and failures, but I realize all of it was training to get to this new chapter, and this new building marks the second chapter of Scarpetta. What we’re doing here in Nomad is so dynamic and located in the center of the new New York, so it’s a great iconography of New York. This new amplified Scarpetta 2.0 paired with the nightlife downstairs in this sprawling space with one of the biggest hotel developers is a massive step forward. This is just the beginning of the rest of our career.

The beauty of New York is that you have Wall Street, models, celebrities, politicians and construction guys. There’s a crazy robust mix that very sadly has been changing. As the city becomes more homogenous, it’s lost a bit of its dynamics. New York has to maintain that high-low grit and character to appreciate the mix. We get everyone; it is a beautiful, simmering pot of humanity, and it’s what makes a restaurant special. It’s pasta and sizzle.