MAMO RESTAURANT: The Return of Italian and Provençal Dining in SoHo 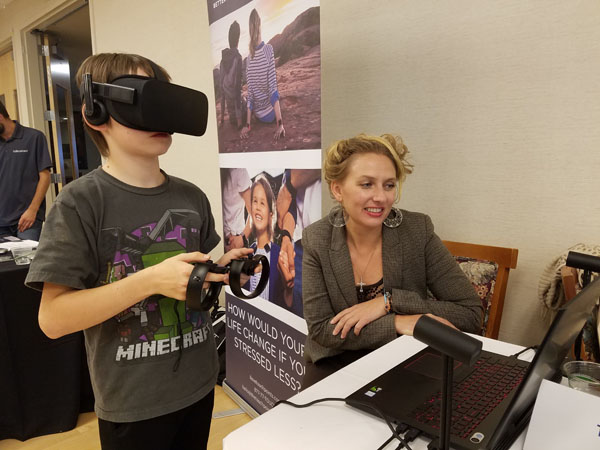 “This brilliant young therapist has worked with me with PTSD veterans with multiple tours as well homeless veterans. She is talented and emotionally wise, healer, gifted in making a real difference. If she has technology to invest in count me in. She is a genius. “ Michael Pritchard PBS Host and Humorist.

What is THERA? THERA is live counseling using virtual reality using customizable avatars. THERA is the creation of Erin Bogdanski and Amit Jain who predict there is a serious need for change in our mental health care system. THERA disrupts that traditional model by allowing a youngster to meet with their therapist in a safe and nurturing space without having to rely on going through the trauma of being hospitalized. How did we come up with THERA? 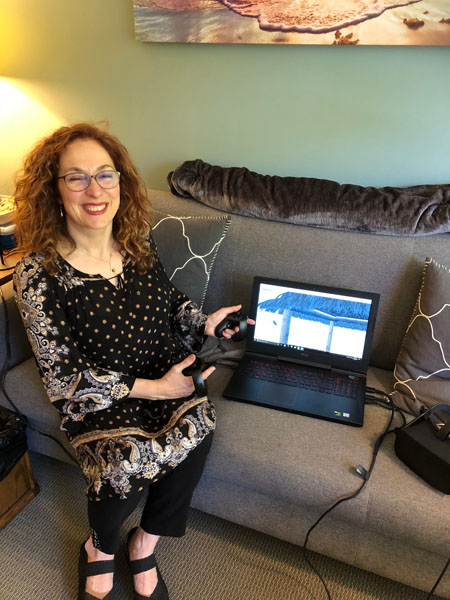 About Erin CEO and Co Founder

Erin started her career at sea. At 21, Erin left British Columbia to move to California and worked on ships for four years.  After working internationally , and learning the richness of global societies had already had a passion for serving others. After her life at sea , Erin worked in business, law and politics for 18 years. At 36, Erin lost her mother to cancer.  After losing her single mother, Erin felt the desire to go back to graduate school to study health psychology. After focusing her concentration in mindfulness health psychology and neuroscience at Santa Clara University , Erin felt there were options when it comes to healing other than “over medicating “ a person who is suffering from surface symptoms. Going through the rigorous journey of accruing 4000 clinical hours post graduate experience , Erin felt there was a major flaw in the mental health care system and that there needed to be change.

In between internships, Erin met Dr. Walter Greenleaf, neuroscientist and expert in virtual reality at Stanford University. After meeting Walter, Erin was inspired to know that there are alternatives to treatment for a plethora of different conditions through the immersive mind/ body experience of using virtual reality.

Shortly after coming out of private practice and entering the medical model of the psychiatric system of inpatient, Erin was exposed the most intense part of mental health… the “trenches”. Erin witnessed hundreds of youngsters, as young as 8 years old , attempting suicide and cutting. The hospital could not even accommodate for the level of need. At the rates she witnessed as a clinician , she could not stop to think. “ Why are our children turning to self harming and suicide?”. At the same turnpoint, Erin saw what the current solution to this problem was in the medical model. Drugs.

A child’s developing mind cannot support the amount of heavy medication. In fact the American medical model for most inpatient settings for a suicidal child are to provide a cocktail of medications even at times when the person does not a history of mental illness.  Due to the bio psycho social standards, many children start to become dependent on those medications and then are turning to this system of being over medicated. In many sessions, Erin would be counseling a patient who once identified herself as , “ my name is not Sarah, my name is Zoloft”.  After two years of listening , and hearing the voices of these kids, Erin’s vision started to take effect. Why can’t we bypass the drugs and create a preventive tool that kids can go to a safe place? Why not create these environments to talk to someone in virtual reality?

In 2017, Erin made a trip to LA , to meet Dr. Skip Rizzo at the USC Center for Creative Technologies. Dr. Rizzo , a veteran in virtual reality and treatment to post combat veterans using VR is one of the leading experts in the future of psychology and technology. Rizzo is the brainchild of  Bravemind. Dr. Rizzo’s research has proven that using virtual reality can have a 90 % efficacy rate in reducing symptoms of PTSD when being used in contained environments. Rizzo became Erin’s guru and hence galvanized her determination to make THERA a reality.

Following up with her advisor , Greenleaf introduced Erin to San Francisco based company High Fidelity. Created by founder Philip Rosedale, CEO, High Fidelity is one of the largest social virtual reality platforms in the world. Erin met with Tom Schofield, COO and told him the story about the urgency there is with our youth and mental health. Tom immediately supported THERA and has been their VR support from the beginning.

In 2017 , Erin met Amit Jain, Co Founder of THERA at an accelerator in Menlo Park , CA. Taking a huge leap of faith taking time from her work at the hospital , Erin dedicated her time to be mentored under Amit who eventually became the technology lead on THERA. Amit’s passion in identifying the problem and his expertise on tech startups and medical devices married the vision of THERA with health tech.

Early , 2018 met her Virtual Reality team Saro Nikraz PhD. and Armand Aguirre. Armand was a graduate from the Arts Institute of San Francisco and has a passion for VR/ AR and AI after working in several projects in the Bay Area.  Saro holds a definitive background in virtual reality design , science and strategy/ design developed the “ therapeutic” spaces to be used in THERA. After interviewing several children and teens, Erin came to Saro and asked … “what would be the most safe space a child can go to talk with their therapist in VR? “. The answer was Nature.  Forests, ocean, and rooms that have views of nature. It is these natural elements which people feel comfortable with in a VR therapeutic setting. What is great about virtual reality is we can create these spaces , at the discretion of the patient.

What else is different as opposed to the traditional couch? Erin interviewed several children and teens and asked what would it be like to talk to their therapist in avatar form. Many kids said they would like to choose that person they are looking at so they have a level of comfort when exposing themselves in a vulnerable environment. Likewise , kids liked the idea that they can choose their own avatar. Why is this important? This gives the person who is receiving therapy a little more anonymity and they predict this will create higher rates of retention in therapy. 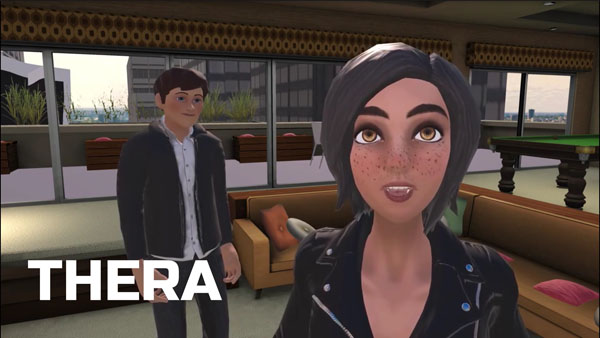 How did we do it?

Erin recruited one of her colleagues Edina Adler, LCSW to be the first therapist to test THERA on a teen. Edina had a background in family therapy and especially with children using play therapy. Since many therapists do not have a background in technology, Edina took on the challenge using her creativity, clinical professionalism and art of counseling. After 10 sessions of testing THERA , there was some noticeable changes in the client such as increased motivation, positive emotions and self efficacy. The feedback was even more impressive showing that this new environment of creating a space where one can not just talk to another but can also create a sense of safety was a discovery to the team. “ It is nice knowing that there is someone else with you” ( feedback from a client).

After looking at the results , THERA was not just providing a sounding board for youngsters to use to talk to someone but it was also creating a sense of safety. Erin thought about this even more in that because THERA could eventually be accessed remotely and at anytime using AI that this platform may be a preventative tool to prevent suicide attempts or self harming.

After the experience of testing THERA , Erin decided to recruit a surge of ambassadors to help bring THERA to a wider audience. Slowly a small team developed in the Bay Area and is now slowing being put together in the New York City area.  Her new ambassador therapists Valerie Beltran, LMFT and Leslie Baker, LMFT accepted the opportunity to test virtual reality with clients in safe and nurturing environments. Valerie integrates consciousness, technology, and spirituality in her practice and is part of the VR community in the Bay Area. As part of the new wave of young therapists in the country, Valerie can see how virtual reality therapy can help build her practice. Additionally, Leslie Baker MFT practices in the East Bay, Ca. This location is saturated with families and especially at risk teens. Leslie has several publications and a stellar history of delivering therapy not just with families but with providing marital counseling. Using THERA, a couple who may have a history of domestic violence or poor communication, can use the tool as a safe environment in VR , allowing them to not be together physically in the same room.

THERA are small fleas but their goals are to reach counseling youngsters across the country and especially those states that have the most vulnerable populations. The vision of THERA is to try and develop our tools to eventually allow 24 hour access to nurturing spaces for young people so that can go to a “ safe place”. Eventually we would like to see THERA expand to several different populations and to help those who are needing to talk to someone remotely and experience the mind/ body connection of being “ in world”. THERA is taking therapy to a new world. Theravr.io