Melba Wilson is the New President of the NYC Hospitality Alliance 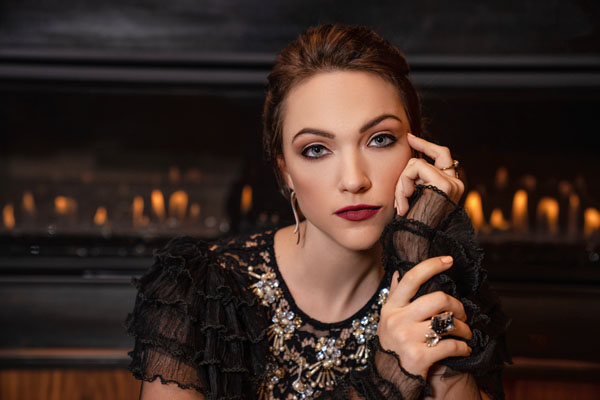 With shoulder length brown hair, jeans and sweater wearing Violett Beane, a native of Austin, Texas can go from cool girl next door to superhero to your new favorite television star in her latest show, God Friended Me. Violett, who has starred as DC Comics superhero Jesse Quick on FLASH and has had recurring roles on The Leftovers and The Resident in addition to recently appearing alongside Lucy Hale in the horror film Truth or Dare, is now living in Brooklyn with her boyfriend and loving city life. Just as she can change characters in her various roles, she can also effortlessly change up her style – you have to see her to Beane-lieve it!

God Friended Me is so different from other shows you’ve been a part of, what attracted you most to this project?

I was auditioning multiple times a day this past pilot season and this was one of the only scripts that made me feel happy after reading it, like, I felt very uplifted and that there is humanity in this world, and I think in the world that we’re in right now we need a show like that and I think I was feeling that during pilot season.

Is this going to affect your future roles going forward?

When you’re first starting out as an actor or any industry, you don’t get a choice, you want to work so you work on things that come and you do what you have to do, but working on this has made me realize that I want to be part of something that is making a difference or is talking about something people aren’t talking about. In God Friended Me we talk about faith, we talk about family drama and things that are happening in people’s lives.  What I’ve noticed so far is that people are reaching out and saying their lives have changed since just watching the show and they have a little bit more understanding about the people around them or their family and friends. 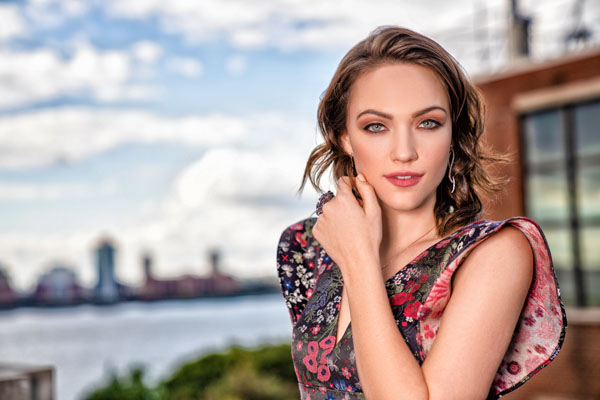 Do you think we’re going to start seeing more of a trend of shows that people can relate to?

I love watching shows about murder and dark comedies but I think there’s sort of a change happening in television and movies where people want to feel good because there’s so much going on in the real world. If you can just escape for one hour on a Sunday night maybe it can just make everyone feel a little bit better.

Were you surprised by the success of the show thus far?

We’ve done a few press junkets for it and the viewing has been amazing and the numbers blew all of our minds. The day after we premiered for our season the crew was so happy and the vibe on set was amazing cause we got eleven million views and it’s not that we weren’t expecting it,  it’s just that you never know, and all the feedback we’ve been receiving has been pretty positive.

How are your co-stars? Do you hang out with them?

Everyone is so great. We recently went to dinner and then we were walking to get cookies and there was this random dance party in Washington Square Park…and that’s New York. (In case you were wondering, it was Insomnia Cookies!)

Will we see you as a superhero again anytime soon?

They just started airing the fifth season of FLASH and I know the creators mentioned they’re bringing back some of the Speedsters from previous seasons. I’ve loved playing Jesse and putting on a leather suit, the set was a lot of fun so I’d love to go back. 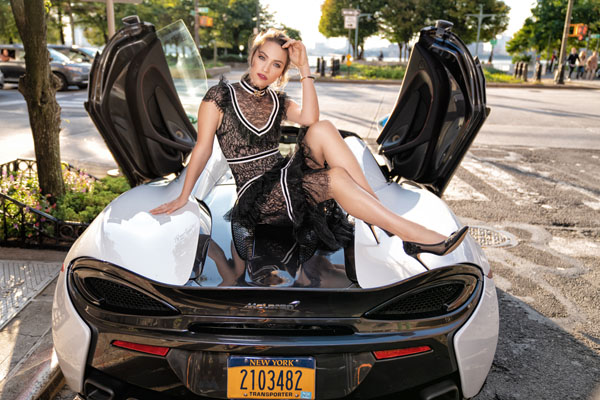 When did you first get into the biz?

The Leftovers for HBO which was shot in my hometown of Austin, Texas was one of the first major things that I did and it was such as fun experience cause I didn’t know anything about set or how to find my mark. Every project I’ve done I’ve learned so much more and grown, it’s been so great.

Where are you living now that you’re filming in NYC?

We shot the pilot here in New York in March and then we moved two and a half months ago. Me and my boyfriend live in Fort Greene. I’m such a fan of New York, I love Brooklyn. I said I’d never move to New York without a job but moving for a job is ideal.

Which Coast is really the Best Coast?

They’re so different but I’m the kind of person that doesn’t look back on things that happen, I don’t really miss LA to the point where I wish I was back there, I’m really enjoying being here.

How would you describe your signature style?

I mostly always have something vintage in my outfit like jeans or shoes or a purse or something – and comfortability – like you’ll find me in jeans and sneakers and a sweater and popcorn socks. 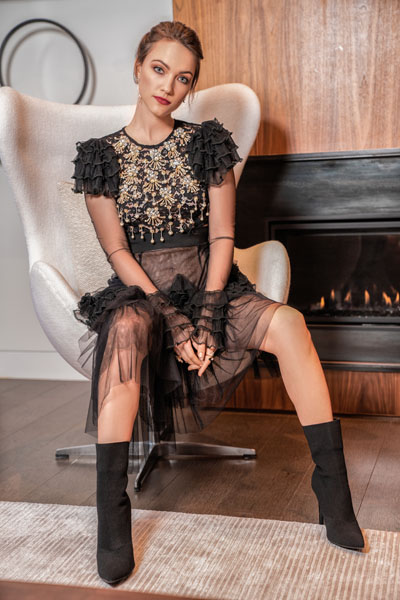 I love Park Slope and Clinton Hill, whenever my boyfriend and I wanna get dinner we go over to that area. There are so many cute restaurants and what I’ve found is pretty much any restaurant you go to is gonna be good cause the rents are so high. Oh, the pizza near us, Not Rays is our favorite. Being back in the theatre world has also been amazing, we saw Girls &Boys with Carey Mulligan and it was so, so fantastic. It’s so exciting, there’s always something going on.

Have you ever done stage productions?

That’s how I started in high school. I was pretty much in every play and then in between my junior and senior year we got a new coach who didn’t like me for some reason and he stopped casting me and I was missing that aspect of my life. I found an agent in Austin and got parts for TV. Now that I’m here I’m itching to do theatre again.

I am going to be filming something this summer which is very exciting, and I think fans of mine will be excited for it, I don’t know if anyone’s expecting it.  And we just found out that we got a full order, the back half of our season for God Friended Me.

Where have you been traveling lately for pleasure?

Most recently I went to Iceland. It was so cool. My boyfriend and I rented a car in Reykjavik  and drove down the South Coast and stopped at every place, pulling over every five minutes and I’m going to Tulum for Christmas. 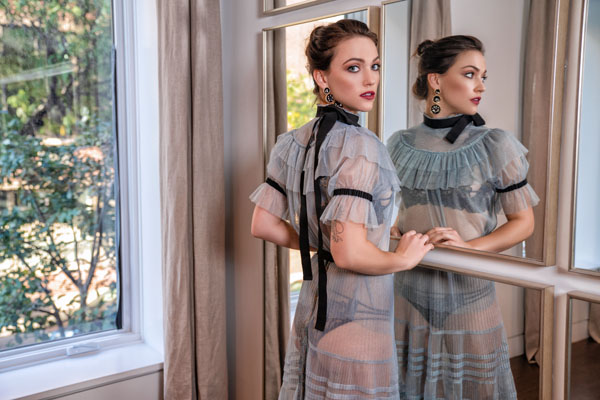 You often use your voice to help animal related causes, is this something you’ve always been passionate about?

I’ve always loved animals and I grew up surrounded by them: cats, dogs, bunnies, chickens and it definitely played a part in my decision to go plant-based. Not to mention all of the environmental impacts raising animals for meat has. I recently did a PETA campaign for their “All Animals Have The Same Parts” where you see different parts of my body labeled like they would be if I was a pig raised for slaughter. The campaign is essentially saying that whether it’s a pig, cow, dog, or human, we all have the same parts and all deserve the same amount of respect.

Who are you wearing most these days?

My go-to designers right now that I love are Alice + Olivia, Opening Ceremony, and Monse. 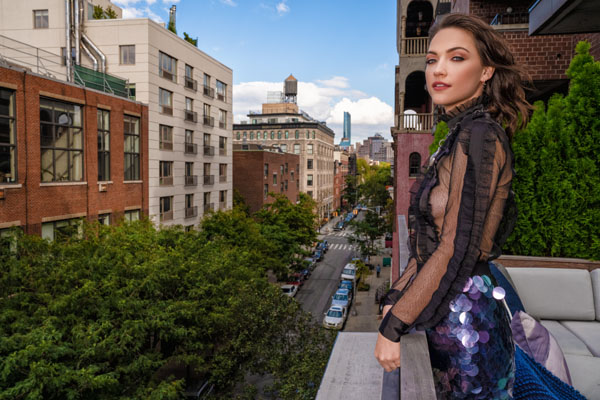 Dirt Candy – it’s vegan and I’m plant based and I’ve heard that place it so good, but I swear every weekend that place is so booked up.

Shot with a Mclaren 570S Spider