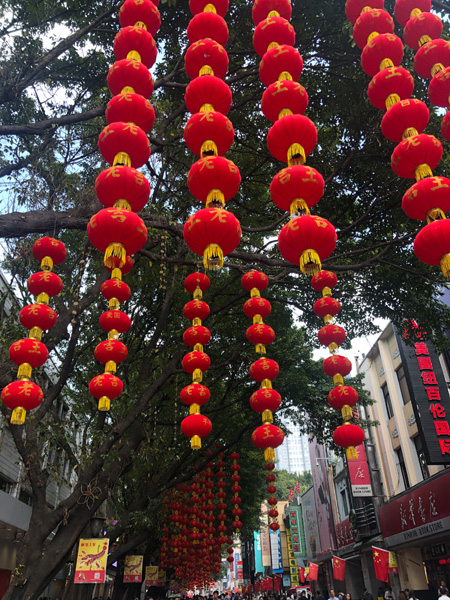 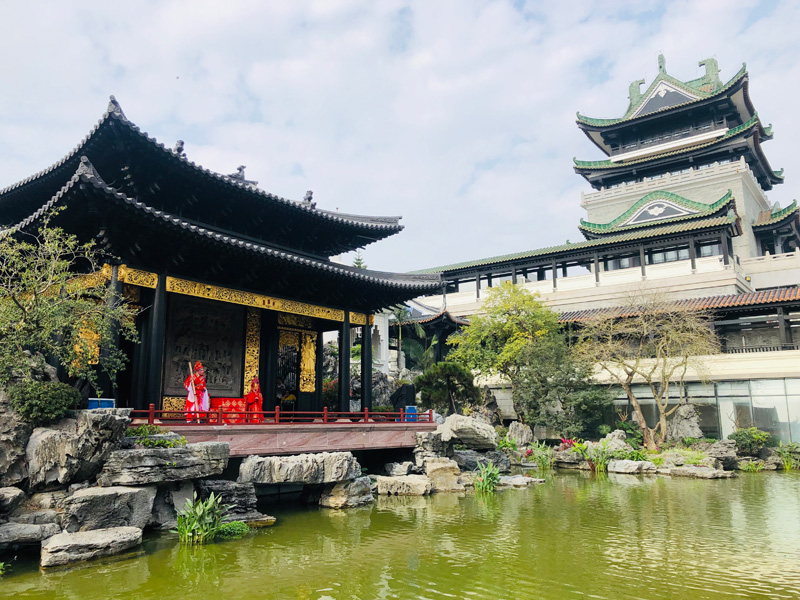 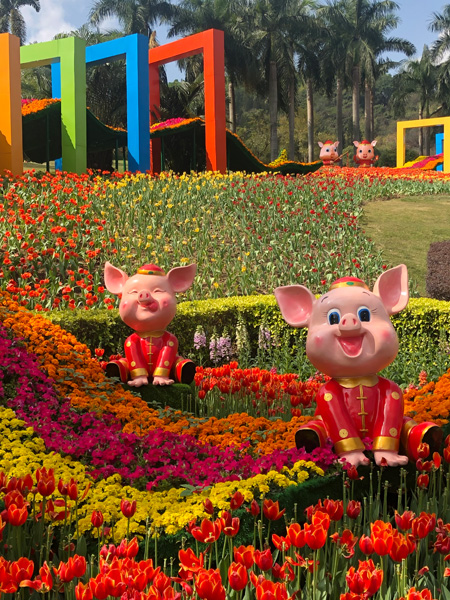 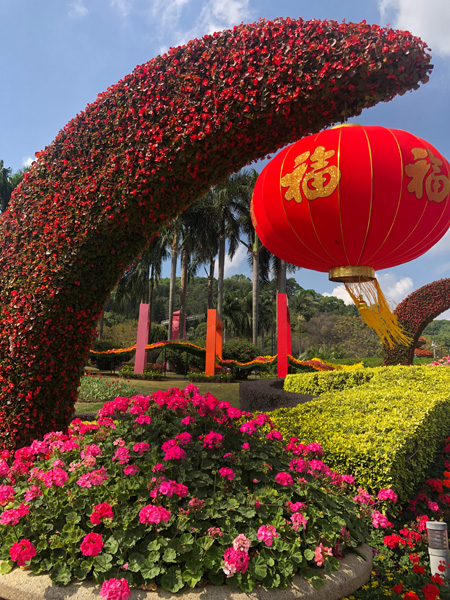 As the third largest city in China, and as the capital of the thriving industrial province of Guangdong, Guangzhou, also known as Canton, is the birthplace of Cantonese culture and language. With a history spanning over 2000 years, this city embodies the evolution of China from what it was to what modern China represents today. Historic and cultural landmarks coexist with the glittering new China with luxury retail outlets, architectural marvels, and five-star hotels, which are symbols of the financial prowess of China and their outlook to the future. Resident had a chance to visit this vibrant city during Chinese New Year to celebrate the cultural wonders of this rich city.

Though Guangzhou is largely a business destination, there are many cultural attractions within this bustling metropolis. The temperate Southern China weather and strategic position along the Pearl River provide a tropical climate to sustain lushly-landscaped parks and water activities to enjoy when outdoors.

Yuexiu Park is the largest park in downtown Guangzhou, encompassing 212.5 acres and holding the towering Five Ram Sculpture, which has come to symbolize Guangzhou. Legend has it that more than 2,000 years ago, the city was a barren land with people who, despite hard work, were suffering from famine. One day, five immortals, each wearing a different-colored robe, played music and came riding on five rams that held rice stalks in their mouths. The immortals gave blessings to the city and left. The rams turned into stone and the city became a rich and populous place, known as the City of Rams.

Yuntai Garden is China’s largest landscaped botanical garden, covering 120,000 square feet and located at the southern foot of the Baiyun Mountain. For Chinese New Year, the garden was transformed into a rainbow-hued playground that resembled scenes from the Wizard of Oz with glorious technicolor displays of exotic flowers and plants.

Days prior to Chinese New Year, the famous shopping street of Beijing Road is transformed into the Flower Fair and filled with dangling red lanterns, with vendors selling flowers, tangerines, and kumquat trees; this has come to represent the Spring Festival. Along this road, there is a glass archeological display showing the original road from the Song Dynasty dating back over 1000 years to 960 AD.

Along Beijing Road, you can savor delicious Cantonese dim sum, which Guangzhou is known for. The Chinese equivalent to tapas, dim sum plates consist of small delicacies that are served on carts and washed down with tea.

Located in the historic Liwan District, the birthplace of Cantonese opera, is the Cantonese Opera Art Museum. Outdoor performances are held within a beautiful and traditionally landscaped Lingnan-style Garden with a Gungfu stage. The architecture and grounds replicate the art of Cantonese opera with traditional Cantonese and Chanzhou wood carvings, brick and stone carvings along with clay sculptures and Shiwan pottery. Inside the museum, visitors can learn about the history and fine art of Cantonese Opera with costumes, clips, and tributes to famous performers.

Chen Clan Academy was formerly a private villa built in 1894 during the Qing Dynasty, and it now houses Cantonese folk art masterpieces. This stately building is an excellent example of typical Lingnan architecture with richly-decorated embellishments and a perfect feng shui layout.

During the 19th century, Shamian Island in the Liwan District was divided into two concessions by the Qing government and given to France and the United Kingdom. Today, this charming sandbank island gives the feeling of being in Paris with its historic colonial buildings flanking pedestrian tree-lined streets, attracting visitors who enjoy leisurely afternoons in their outdoor cafes.

In the heart of the old town is in Yongqing Fang, which is also home to Bruce Lee’s birthplace. Characterized by winding alleyways and cobblestone streets, this neighborhood was once the center of commerce but fell to disrepair. However, the neighborhood has been revitalized recently to become the hipster hub of Guangzhou, attracting young creatives, galleries and cafes to this charming area.

Opened in 2010, the posh pedestrian zone of Huacheng Square, or Flower City, sits on the axis of the Zhujiang New Town. It has become the new epicenter for Guangzhou’s financial and cultural hubs. Surrounding this massive square are gleaming skyscrapers housing office spaces, five-star hotels and luxury residences. It is also a commercial and cultural center with a sprawling underground shopping megaplex, and important public buildings, including the Guangdong Museum, Guangzhou Library, and Guangzhou Opera House designed by Zaha Hadid, which are lit to splendor at night.

Experience the Pearl River dinner cruise where you can witness an electrifying light show along the coastline. Rainbow-hued sparkling lights dazzle the senses as you sail past skyscrapers glowing with dancing LED colors on land and glide under twinkling bridges alongside other colorfully lit boats.

Across the Pearl River is the highest TV tower in China—the iconic Canton Tower that stands at 1,982 feet and glows with animated colors at night. From the top observatory deck, you can get a 360-degree panoramic view over Guangzhou to see the old town that coexists with the modern city of today—a testament to the rapid economic growth of this dynamic city.

The Dong Fang Hotel is centrally located to all Guangzhou’s attractions in the Yuexiu District. Perfect for business travelers and tourists, the spacious hotel has 699 rooms, each equipped with a flat screen TV, complementary high-speed WiFi, and luxurious bathrooms with separate showers and bathtubs. Relax after a day of touring in their landscaped garden featuring an outdoor pool and sauna. Choose from an extensive selection of Western and Asian specialties at their breakfast buffet served in their alfresco indoor and outdoor garden restaurant. Cantonese specialties are also available from their other three dining establishments.

Getting to Guangzhou has never been easier with direct flights from JFK on China Southern Airlines, the largest airline in China and the third largest in the world. Business and first-class passengers can relax and rejuvenate at their luxuriously appointed Sky Pearl VIP Lounge, which spans over 15,000 square feet with comfortable loungers and showers as well as an array of delicious Cantonese cuisine and delicacies.

The JFK to Guangzhou flight uses a Boeing 777-300ER jet with 4 classes of service. To truly fly in comfort, their business-class seats extend 180 degrees to a fully flat bed with plenty of room to catch some much needed rest. One of the exclusive offerings of China Southern Airlines is their popular premium economy class that offers an elevated experience from economy with an enlarged seating pitch to 38” with 6 inches of additional legroom for a relaxing flight. All cabins are equipped with the world’s most advanced TopSeries AVANT fourth generation android touch screen—an entertainment system featuring audio and video on demand, games, 3D maps, books, transit information, and other services. For meals in the business and first-class cabins, China Southern has collaborated with some of the best Cantonese chefs to prepare authentic meals that showcase the delicate flavors of their classic dishes to create an unrivaled experience in the sky.