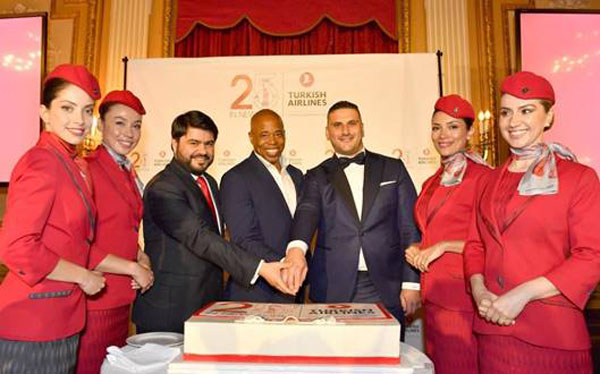 Turkish Airlines, the airline that flies to more countries than any other in the world, celebrated 25 years of non-stop service to the United States, last month at the Metropolitan Club, one of New York City’s most exclusive and prestigious clubs since its founding in 1891.

Turkish Airlines started flying from Istanbul to New York City in 1988 but inaugurated its first US non-stop service to and from John F. Kennedy International Airport in 1994.

“Our core mission is – and has always been – to bridge continents, connect countries, and unite communities. Having a centrally-located hub between the continents of Europe, Asia, and Africa, Istanbul provides excellent connectivity, allowing us to increase our passenger numbers consistently” stated Cenk Öcal, Turkish Airlines New York General Manager. “We are extremely proud of what we have been able to accomplish here in the United States over the last 25 years, especially considering the airline’s humble beginnings. Great success requires the hard work and collaborative partnership of great people, and we’re proud of what Turkish Airlines has achieved over the last quarter century in here.”

Throughout the evening, guests enjoyed fine Turkish dishes, bites from a raw bar, Turkish delights, baklava, and Turkish coffee and tea flown in for the occasion. A live band provided entertainment for the duration of the evening, and representatives from Royce New York, who monogrammed Turkish Airlines-branded luggage tags and passport holders for guests, were also on site.

A 25th-anniversary cake presentation and raffle prizes including certificates, business class tickets and stays at several luxury hotels in Turkey ended the celebration on a sweet note.

This year, Turkish Airlines also celebrated its 86th anniversary as an airline and moved all operations to the new Istanbul Airport. The new airport will be the largest airport by passenger traffic upon completion and is home to five Turkish Airlines lounges available for Business Class, Miles & Smiles Elite Plus& Elite, Star Alliance Gold and Corporate Club passengers.

Established in 1933 with a fleet of five aircraft, Star Alliance member Turkish Airlines has a fleet of 338 (passenger and cargo) aircraft flying to 311 worldwide destinations as 261 international and 50 domestic, in 124 countries. More information about Turkish Airlines can be found on its official website www.turkishairlines.com or its social media accounts on Facebook, Twitter, YouTube, LinkedIn, and Instagram.