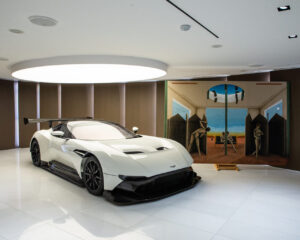 Guests mingled and entertained the art as they sipped on Bodvar Rosé and UME Plum
Liqueur martinis as DJ Ty Sunderland played upbeat hits to the glamorous crowd. “Where the
Crawdads Sing” star Taylor John Smith shared snaps to his Instragram story, while South
African media personality Bonang Matheba posed for photographs in between a $2.3m Aston
Martin Vulcan Hypercar and a 10-foot masterpiece Work by Addison.